So to recap, after Prince Ali/Aladdin abruptly arrives to court Princess Jasmine, the evil Jafar attempts to have the fake prince murdered so that *he* can marry Jasmine instead and become Sultan. Luckily for our hero, Genie is able to save Aladdin via his second wish and take him back to the palace. After informing the Sultan about the truth: that Jafar a) tried to have Prince Ali killed and b) has been manipulating the Sultan with his cobra staff for years , Jafar is ordered to be arrested, but just before the vizier escapes, he notices the lamp resting in Ali’s turban, which for him can mean only one thing: Ali is Aladdin and HE has the lamp that Jafar has been after this entire time!

As soon as Jafar sees the lamp, you just KNOW he’s going to get his hands on it at some point. The devious parrot Iago is dispatched to get the lamp away from Aladdin. This proves easier than one might think, because at the same time, Aladdin is suffering from a tremendous amount of guilt. The good news is that Princess Jasmine is in love with him and the Sultan approves. The bad news (in Aladdin’s mind) is that once they get married he (Aladdin) will become Sultan, and he doesn’t feel like he’s up to the task, especially if he keeps his promise and uses his last wish to free the Genie. So…Aladdin not-so-gently breaks the news that he won’t be freeing the Genie after all, which upsets everybody.

Aladdin finally decides that he has to tell Jasmine the truth, that he’s not really a Prince. Great decision, too bad it comes just as Iago is out to get the lamp. He mimics Jasmine’s voice to lure Aladdin out of his room and quickly swipes the lamp away. The Genie is less than thrilled to find himself in Jafar’s hands, but he doesn’t have the ability to refuse Jafar’s first wish: to become Sultan!!

Just as this happens, the real Sultan is getting ready to proclaim to all of Agrabah the joyous news: Princess Jasmine has finally chosen a suitor, Prince Ali! Before Aladdin can tell anyone the truth, the sky grows dark and Jafar appears out of nowhere, now clothed in the robes of a Sultan (even Iago has a little Sultan hat!) No one is quite sure how this happened, but Aladdin finally figures it out when he goes to get the lamp and finds it gone! Now comes the second part of Jafar’s first wish (He phrased it as “I wish to rule on high, as Sultan). The only way to rule “on high” is to have a palace HIGH in the air, so…Genie appears to lift the royal palace to a high cliff.

Now that he is Sultan, Jafar expects to receive the proper respect, but both Jasmine and her father refuse. Enraged, Jafar uses his second wish: to be the most powerful sorcerer in the world! With this wish granted, Jafar decides it’s time to tell Jasmine how things really are: enter the reprise of “Prince Ali.”

The all-too-brief song is performed in a mocking style of the original “Prince Ali” and serves to show everyone the truth. While Jasmine is held in a magical beam, she is forced to watch as Jafar magically transforms Aladdin’s princely outfit back into the rags he wore in the marketplace. Abu is changed back into a monkey; Rajah is turned into a tiny kitten and all are held helpless. But before Aladdin can tell Jasmine anything, Jafar continues! This next verse really explains it all:

“So Ali turns out to be merely Aladdin/Just a con, need I go on? Take it from me!

His personality flaws/give me adequate cause/to send him packing on a one-way trip,

Where his prospects take a terminal dip/his assets frozen, the venue chosen is the ends of the Earth, WHOOPEE!!! So long! Ex-Prince Ali!!”

Jafar uses his magic to send Aladdin and Abu flying into a tower (the magic carpet secretly follows) and with all watching (including the unhappy Genie), the tower is sent flying away like a rocket towards “the ends of the Earth.” 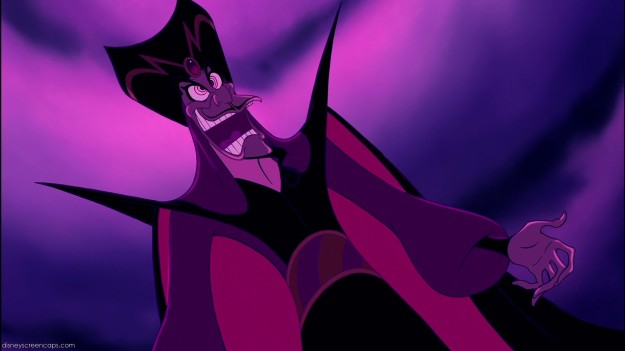 I think all that power has gone to Jafar’s head…

Waving Aladdin farewell, Jafar descends into maniacal, psychotic laughter, as his shadow looms over the ex-Sultan and Jasmine. Hearing this song really makes me wish that Jafar had a full-length song of his own (but sadly he does not).

Ok, I WAS going to make this the last Aladdin post, but remembering how this song ends, I realized I just can’t leave things hanging like this, so there will be one more Aladdin post after this one to cover the climax of the film. I also wanted to let you know that I’m going to cut back a little more on the amount of posting I do during the week (it will probably go down to one a day) because I need to focus some more on my dissertation. I promise I’m not going to disappear, just write a little less (for a while anyways).

Enjoy the reprise of “Prince Ali”, and enjoy the weekend!