Before Vampire Diaries, even before Buffy The Vampire Slayer, there was Kindred: The Embraced.

Unlike most television shows, which might be based on books or movies, Kindred: The Embraced is loosely based on a role-playing game called Vampire: The Masquerade. The story is set in San Francisco, where a detective named Frank Kohanek discovers that the city is home to a large number of vampires, including a supposed “mobster” that he has been pursuing for quite some time. In reality, this “mobster”, Julian Luna, is actually the “Prince” of the city, ruling five groups of vampires that are collectively known as The Kindred.

Julian and Frank form a reluctant alliance due to the fact that Julian used to be with Frank’s girlfriend, who was also a vampire (and who got Julian to promise to protect him shortly before her death). Thus, the pair find themselves working together to try and prevent a war breaking out between the different groups of the Kindred.

While the premise certainly held a great deal of promise, a massive flaw was that the show dealt with five separate groups of vampires, on top of any subplots with Julian and Frank, which led to a lot of characters to keep track of and a confusing plot. Also, the character of Frank was not very well received, while Julian was praised as a complex character, not quite good and not quite evil. Ultimately, the flaws outweighed any good points, and Kindred: The Embraced was cancelled after eight episodes. Ironically (in my eyes), Buffy The Vampire Slayer debuted the next year and went on to run for seven seasons. Perhaps if Kindred: The Embraced had been slightly different, it might have been the big vampire hit, and not Buffy, but I guess we will never know. 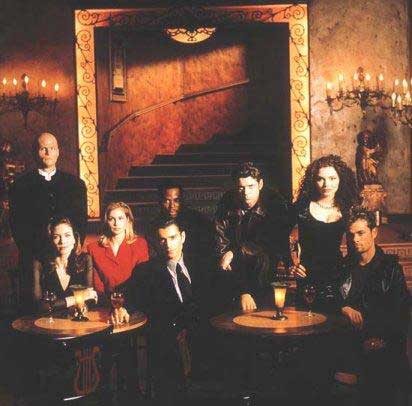 Have you seen any of Kindred: The Embraced? Do you think it had potential, or was it doomed to failure from the start? Let me know in the comments below, I’d love to hear about it. If you haven’t seen the show and would like to check it out, the eight episodes are available on DVD.

For more shows that were cancelled too soon, see here