During the course of The Sword in the Stone, Merlin teaches Wart (the future King Arthur) a series of lessons that will help him in life: as a fish, Wart learns that brains can defeat brawn; as a bird, he learned that knowledge and wisdom are the real power; but it’s when Wart is a squirrel that he learns about the greatest lesson of all…the power of love.

After being unfairly given a mountain of work in the kitchen by his foster father, Wart is led out of the castle by Merlin with a promise to see into the crazy, dangerous life of a squirrel (it also helps that Merlin sets up a magical “washing assembly line” to get the dishes done in Wart’s absence).

And so, Wart is turned into a common brown squirrel and Merlin into a blue one (which always amused me) and the two set off to first learn about climbing trees (Wart is eager to make the jumps; Merlin…not so much). But they’re not alone for long: Wart quickly comes nose to nose with a red squirrel climbing along in the opposite direction.

They move out of the way, but the girl squirrel isn’t interested in moving aside, she’s interested in Wart! (As Friend Owl would say in Bambi, she’s “twitterpated.”) This prompts a highly amused Merlin to sing a song explaining the unavoidability of love in “A Most Befuddling Thing.”

It’s a state of being, a frame of mind
It’s a most befuddling thing
And to every being of every kind
It is discombooberating!

You’re wasting time resisting
You’ll find the more you do
The more she’ll keep insisting
Her him has got to be you
It’s a rough game anyone knows
There are no rules, anything goes
There’s no logical explanation
For this discombooberation
It’s a most bemuddling, most befuddling thing

There’s no sensible explanation
For this discombooberation

And as Merlin sings, Wart does everything he can to try and evade the girl squirrel who is determined to shower him with affection (whether he wants it or not!) Poor Wart runs into every obstacle imaginable: a harassed mother bird trying to sit on her eggs, Archimedes the owl who’s trying to take a nap, and a rather determined wolf (who nearly gets Wart on a few occasions). But the tables are soon turned: as Merlin’s song comes to an end, he unwittingly comes to the attention of another red squirrel (I always think of her as the pretty girl squirrel’s older sister) who takes a fancy to Merlin!! 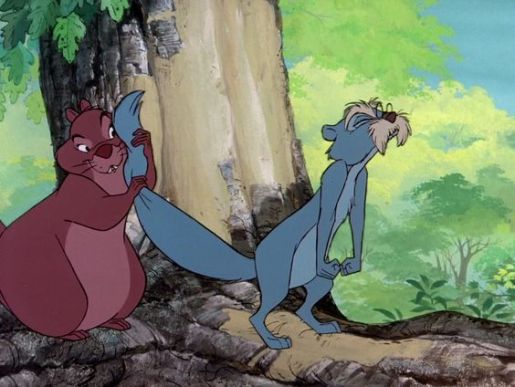 Not anticipating this (hilarious for the audience) turn of events, Merlin decides that this particular trip needs to come to an end! Wart agrees and the spell is quickly undone. But while Merlin’s red girl squirrel runs away screaming in fright (and then anger that her “squirrel” is actually a grouchy old man), Wart’s girl squirrel is quite upset, clearly not understanding why her beloved boy squirrel has disappeared. Of course Wart can’t explain himself because squirrels don’t understand human language and the heartbroken girl squirrel runs away crying to a hollow in a tree. A sobered Merlin sums up the situation for Wart perfectly:

Merlin: Ah, you know, lad, that love business is a powerful thing.

This is one of the saddest moments in the film because there’s really no way to “fix” the girl squirrel’s broken heart. And it’s a double strategy because Merlin explained earlier that “when a girl squirrel mates, it’s for life.” This would imply that the girl squirrel is going to be alone and heartbroken for the rest of her life (which is a very sad thought). But it’s like Merlin said, love is a very, very powerful thing.

What do you think of “A Most Befuddling Thing” from The Sword in the Stone? I always giggle when Merlin finally notices the older girl squirrel sneaking up on him. Let me know your thoughts in the comments below!