Forgive the pun but I decided it’s time to clear another elephant out of the room. Unfortunately, for everything good that Disney has contributed to film and animation, there are multiple examples of Disney portraying things they probably want to forget about. One example is the “Song of the Roustabouts” from Dumbo (1941). After baby Dumbo arrives on the train (via late delivery from the stork), the train pulls in to where the circus will be held the following day. As a storm breaks out, the elephants and other animals disembark to help set up the big top, accompanied by the roustabouts: these are unskilled laborers, often employed for hard labor. 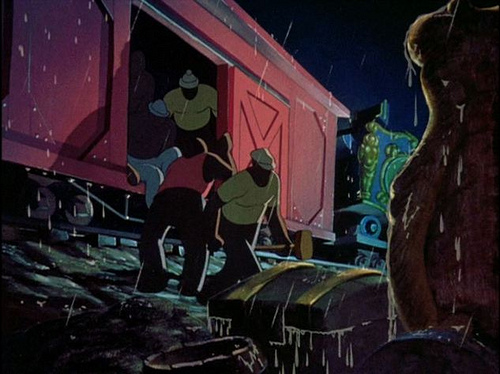 It’s hard to tell given this scene takes place at night, but the roustabouts in Dumbo are all African-American, and given that this takes place in 1941 the lyrics are…interesting to say the very least. The song starts off with cries of “Hike! Ugh!” as the singers/workers establish a driving pattern to aid in driving in the tent stakes:

Just stop and look at these two verses alone: according to the roustabouts they can’t read or write, they work extremely hard and yet despite all this they’re “happy-hearted roustabouts”? It sounds ironic in 2018 but in 1941 they’re being quite serious.

This is the verse that disturbs me the most, it implies that when the roustabouts DO get paid, they promptly blow their money on frivolous things (keeping in line with certain stereotypes about African-Americans being lazy, etc. Remember, this was 1941 and these things were considered acceptable then).

Muscles achin’
Back near breaking
Eggs and bacon what we need (Yes, sir!)
Boss man houndin’
Keep on poundin’
For your bed and feed
There ain’t no let up
Must get set up
Pull that canvas! Drive that stake!
Want to doze off
Get them clothes off
But must keep awake

During this long section, the other animals are shown helping in the set up, mostly the elephants moving stakes and poles, but the camels are helping too. It’s funny, when I watched this movie as a young kid, I was convinced that the circus animals really did help in this way. Even Dumbo is seen doing his part alongside his mother.

The storm that started when the train arrived has now become a full-on thunderstorm (poor Dumbo hides in fright from the lightning). And the song does throw in one last unbelievable line with “Grab that rope, you hairy ape!” (I really won’t explain that one in further detail since it really speaks for itself). At last, despite the driving rain and winds, the big top is raised and come morning the circus is ready to begin!

It might seem strange to focus on these songs (especially given the issues going on in the country right now), but I can’t let these songs slip away unnoticed. Not writing about them is tantamount to saying they never happened, but they did. So on that note, I hope you found “Song of the Roustabouts” interesting. Let me know what you think of this song in the comments below and have a great day!