Thanks to my parents, I grew up watching a lot of older films, including a lot of comedies of the screwball variety. One of these is a film that I enjoy to this very day, and that is The Cannonball Run, a film that is fantastic not just because it’s hysterically funny, but also because it’s based on something that actually existed. The Cannonball Baker Sea-To-Shining-Sea Memorial Trophy Dash was an actual (unsanctioned) race run five times between 1971 and 1979, and just as in the film, one team actually used an ambulance as their race vehicle.

Let’s start from the beginning: The Cannonball Run is based on the aforementioned real-life race and follows a gaggle of racers as they all seek to reach the finish line first by whatever means necessary. Aside from the comedic hijinks, this film is also notable for having an all-star cast, including such names as Burt Reynolds, Dom DeLuise, Dean Martin, Sammy Davis Jr., Jackie Chan (in his second Hollywood appearance), Roger Moore, Jamie Farr, and Farrah Fawcett, just to name a few. It’s not often you see so many stars in the same film at the same time, and it makes for hysterically funny comedy more often than not.

An additional comedic factor is how poorly thought out some of the racer’s plans to win are. For example, the team of JJ McClure and Victor Prinzi (Reynolds and DeLuise) light on the seemingly brilliant idea of racing in a souped-up ambulance (reasoning that no one would want to stop an ambulance running with lights and sirens on). However, the drawback is that wherever they go, people assume they’re the real thing and want them to stop and help people who’ve gotten hurt. Similarly, the team of Blake and Fenderbaum (Dean Martin and Sammy Davis Jr.) get the brilliant idea to disguise themselves as priests, not realizing that 1) priests typically aren’t seen driving in a Ferrari and 2) Blake is an incurable womanizer and…well, I don’t really need to explain why that’s a problem for their cover now do I?

The film jumps back and forth between a number of the racers as they make their way across the country, but the story largely focuses on McClure’s team (and their various misadventures). Several teams even have their own unique musical themes to let you know who’s who in a hurry. For example, Jamie Farr’s character (a ridiculously wealthy sheik), is made known by an almost obnoxious Arabian-like theme. And Roger Moore’s theme, funnily enough, is a riff on the James Bond theme (the filmmakers really couldn’t mention Bond by name so they spoofed the character in every way without actually uttering the Bond name). 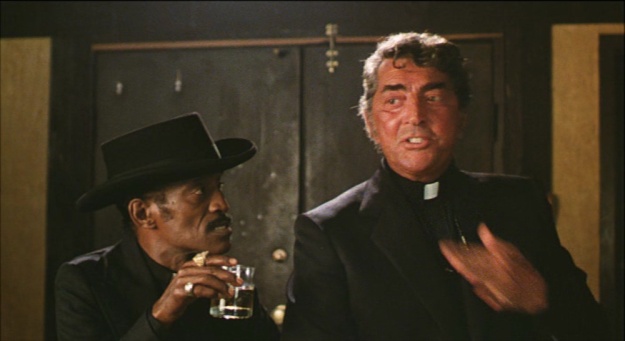 Some trivia to keep in mind during the film:

-The ambulance driven in the film is the actual ambulance that appeared in the 1979 real-life Cannonball race (it didn’t make it however, as the transmission blew in Palm Springs, CA).

-Every time we revisit Roger Moore’s character, there’s a different woman in the car with him.

I really enjoy The Cannonball Run, and if you haven’t seen it before, you definitely need to check it out, it’s really funny (and they just don’t make movies like this anymore).

Let me know what you think about The Cannonball Run in the comments below and have a great day!