“A Game of Pool” is an episode of The Twilight Zone that has become one of my favorites. I admit I ignored it at first, mostly because I wasn’t interested in an episode that centers around the game of pool. But once I checked the episode out, and then watched it several times, I realized it’s a particularly good entry in the series and one that I needed to write about.

The thing with “A Game of Pool” is that its premise is a little difficult to figure out at first. On the surface, this episode appears to be a clear-cut case of “be careful what you wish for.” Pool shark Jesse Cardiff (Jack Klugman), tired of continually being compared to the late legendary pool player ‘Fats’ Brown (Jonathan Winters), makes the mistake of saying he’d give anything to play one game with Brown to prove who is the best. This being the Twilight Zone, Brown appears to accept the challenge.

So in a sense this is “be careful what you wish for” but it’s also something more. As the episode plays on and Jesse eventually agrees to a game with Brown, it becomes obvious pretty quickly that something else is in play. While the episode acknowledges that there’s nothing wrong with becoming the best at something, it does remind the audience that this shouldn’t be done at the expense of having a life outside of that something. Jesse openly acknowledges that his entire life has revolved around pool for years, to a disturbing degree:

Do you know how many hours, how many years I’ve put of myself into this game? How many nights I slept on that table right there? Yea, I did that. I made a deal with the owner so I could practice after the place closed. I haven’t been to the movies in years, I haven’t dated a girl, read a book, because it would take time away from the game.

Jesse is so obsessed with being the best at pool that he’s literally withdrawn from life. If they were to remake this episode today, they’d probably replace pool with video games, because to hear Jesse talk reminds me of stories of gamers who shut themselves in for days at a time, relentlessly playing a game to hone their skills. It’s frightening to think about: he’s spent all this time working to perfect his skills at pool, even Fats Brown didn’t go that far, and he tells Jesse as much, but the pool shark doesn’t listen. 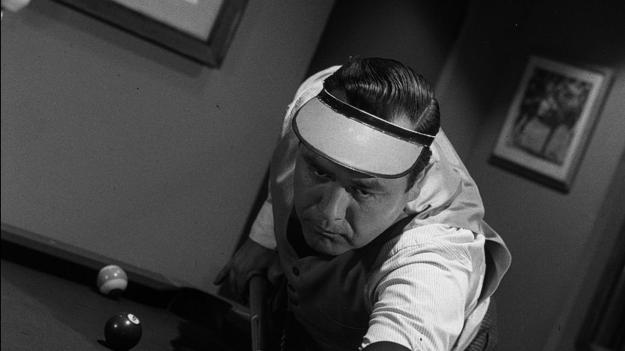 And that’s the other thing about “A Game of Pool.” If you listen to Fats Brown’s dialogue closely, it’s clear that there’s a lot more to the stakes than what he’s telling. Given the stakes of the game seem to include Jesse “dying” if he loses, Fats tries several times to get Jesse to lose the game, right down to the last shot actually. But once he sees Jesse really won’t listen, he gives up and lets fate take its course. As with all Twilight Zone episodes, this one has its own doozy of a twist. When Fats said the pool game would be a matter of “life and death” he wasn’t speaking literally. Because Jesse won the game, he will now live forever (after death), until someone else can beat him the way he did Fats. If he’d lost, he would’ve “died” in the sense that he wouldn’t be a legend and would simply pass on once his life ended.

I suppose Jesse Cardiff’s fate isn’t the worse thing that’s ever happened to a character in The Twilight Zone. After all, Fats Brown was beat eventually, one would assume someone would beat Jesse in time also. But the way Jesse talked at the end about never letting anyone take the title of “being the best” away from him, I suspect it will be a long time before Jesse is allowed to “rest.”

Let me know what you think about “A Game of Pool” in the comments below and have a great day!