The last film I watched from the new Criterion arrivals was Samurai Rebellion, a 1967 film directed by Masaki Kobayashi. If the name sounds familiar, that’s because he also directed Harakiri, another film that I’ve reviewed.

While I enjoyed all three of these Criterion films, I think I liked Samurai Rebellion the most. This may or may not have something to do with the fact that Toshiro Mifune leads the cast in this tragic tale of what happens when a samurai attempts to defy the commands of his lord. The story is set in the 18th century and follows Isaburo Sasahara (Mifune), a dedicated vassal of his lord. Out of the blue, Sasahara is commanded to wed his eldest son and heir to the clan lord’s mistress, Ichi, who has fallen into disfavor with the lord despite bearing him a son. All seems well for two years until….the clan lord demands Ichi leave her new family and come back to the castle. 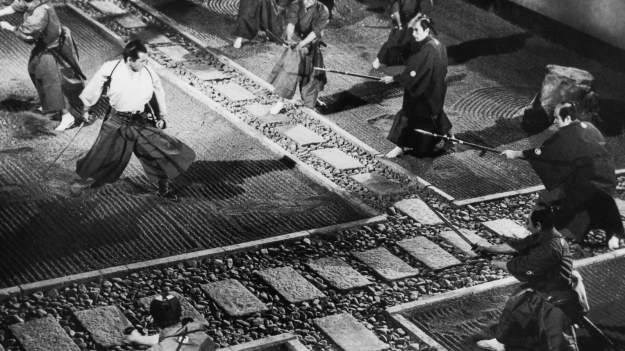 Near as I can tell, the overriding message of Samurai Rebellion seems to be: is it worth it to do the right thing when doing so could get you and your entire family killed? Not only that, but is it even the “right thing” when obeying the order breaks up a happy family? For, you see, if Sasahara were to obey this order, his son would lose his wife and the mother of his own child. The fact that the Sasahara family is supposed to just obey the clan lord’s whims regardless of their own feelings is what pushes the formerly loyal-to-a-fault samurai over the edge into first resistance and then outright rebellion.

Toshiro Mifune is great in this film, as he is in pretty much everything I’ve ever seen him in. And once his characters makes the fatal decision to resist the clan, his entire performance is raised by several degrees. My second favorite performance in Samurai Rebellion is Yoko Tsukasa as Ichi. This is a woman who is trying so hard to adapt to her situation, only to find herself in a tug-of-war between the husband she loves and the clan lord she openly despises. The emotional trauma this is inflicting on Ichi is plain to see, and your heart will bleed watching her suffer in an attempt to get everyone through this struggle alive.

Like Harakiri (which came five years before), the last half of Samurai Rebellion is tinged by a sense of fatalistic hopelessness. Even though Sasahara is doing the morally right thing, he knows (and accepts) that this will not only get him and his son killed, but it will disgrace the entire Sasahara family. But what really makes the story heart-wrenching is that Sasahara comes within inches of actually succeeding in his plan. In the film’s last act, the samurai decides to take his granddaughter to Edo and lay out the entire story to the authorities. And he comes so close to succeeding that it’s physically painful to watch him fail.

Again, like Harakiri (which I belatedly realized came from the same director), I was left watching the film end with the same feeling that came from the end of Harakiri: what was the point of all of this? Because in the end, nothing appears to change. Or does it? The film’s last shot shows baby Tomi being taken away by her nurse, presumably to be raised by her. There’s a subtle implication that maybe the story of what her father and grandfather did will live on with Tomi, assuming the nurse tells her when she’s older.

If you’re looking for must-see samurai films to watch, then you must include Samurai Rebellion on the list. It’s a moving film, a heart-wrenching film, and one I very much enjoyed watching.

Let me know what you think about Samurai Rebellion in the comments below and have a great day!