To the best of my knowledge, Jason and the Argonauts is the first film I ever saw with special effects done by Ray Harryhausen. I’d known what stop motion animation was before I saw this film (having seen the Rudolph the Red-Nosed Reindeer Christmas special dozens of times), but I’d never seen it rendered so lifelike before.

To  summarize: Jason and the Argonauts is an adaptation of the ancient Greek epic of the same name, and it tells the story of Jason, the rightful king of Thessaly, who seeks the magical Golden Fleece (which brings good fortune to whichever country possesses it) as a means to unite the people behind him against the evil rule of King Pelias (who killed Jason’s father at the beginning of the film). To do this, Jason has a great ship, called the Argo, built, and holds an athletic competition to select the bravest and strongest warriors to join him on this dangerous quest (because the Golden Fleece lies on the other side of the known world). Among the “Argnonauts” are Hercules, Argus (the builder of the Argo), Hylas (who wins his place by besting Hercules in a contest, and seemingly had the help of the gods in doing it) and Acastus (who is actually the son of Pelias and out to get the Golden Fleece for himself).

Speaking of the Greek gods, we see a great deal of them in the story too: Hera sets herself up as Jason’s protector, and with the permission of Zeus is allowed to help Jason five times during his quest. In their palace on Mt. Olympus, Hera and Zeus are seen playing a “game” on a huge board depicting the world. It is implied that they are subtly manipulating events in a sort of contest against one another, though neither bears any real malice towards Jason.

During their trip to Colchis, the Argonauts have three adventures: they come to the isle of Bronze to re-supply, and inadvertently disturb the bronze giant Talos (which guards the treasure of the gods hidden on the island). Jason defeats Talos by removing a plug in his heel that keeps the magic liquid powering him inside his body.

They then visit a blind seer named Phineas, who is tormented daily by the Harpies because he blasphemed against Zeus many years ago. In return for the Argonauts capturing them, Phineas tells Jason how to get the rest of the way to Colchis, but warns him of the “clashing rocks”, giving him an amulet to protect him along the way.

At the clashing rocks, they first see a ship from Colchis get destroyed by the rocks, and then slowly make their way themselves. The ship is nearly destroyed and in a fit of anger Jason throws the amulet into the sea, unwittingly summoning a huge merman (implied to be the sea god Triton) that holds the rocks in place until the ship passes through. On the other side, they find the priestess Medea, barely clinging to life and they bring her with them to Colchis.

Jason and the Argonauts “Clashing Rocks” (1963)

Even though the Argonauts have safely arrived in Colchis, their troubles aren’t over yet. Acastus showed his true colors and in the course of a fight went missing and was presumed dead. In reality, Acastus made it to the royal palace first and told King Aeetes his version of the truth, painting Jason and his friends as mere robbers. Upon arrival, Jason and company are taken prisoner, but Medea (who is already in love with Jason), breaks them out of jail and promises to lead them to where the Golden Fleece lies. Acastus is already on his way there, and Aeetes is in pursuit with his soldiers. When Jason and Medea arrive at the tree holding the fleece, they are greeted by the seven-headed Hydra, which already holds a badly wounded Acastus in its coils. 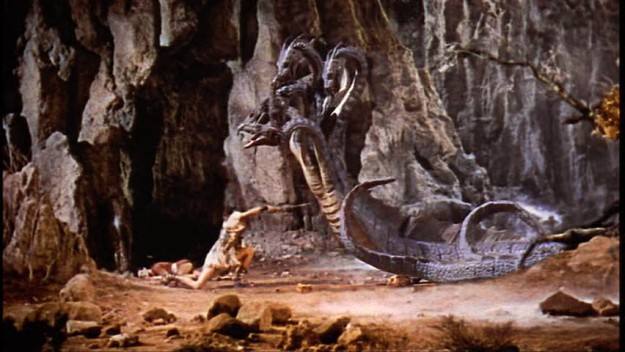 Jason fights and eventually kills the Hydra, but it is too late for Acastus. Taking the fleece and running, Medea is shot by an arrow and badly wounded, but the fleece is used to heal her wounds and she is taken to safety by some of Jason’s men. The rest stay behind with Jason, as Aeetes has one more trump card to play: calling upon the goddess Hecate, Aeetes takes the teeth of the slain Hydra and sows them into the ground, calling upon the “children of the Hydra” to rise up and avenge them. One by one, living skeletons rise from the ground, and on the king’s order, move to attack Jason and his men. It’s a vicious battle, but Jason and company have no hope of winning, as the only way to defeat a skeleton is to completely smash it into pieces, otherwise it will just keep fighting. The final solution is to dive into the sea far below the cliff that they were fighting on (the skeletons smashing into pieces on the rocks).

Jason and the Argonauts “Skeleton Fight” (1963)

Jason has the fleece, and Medea, but will they be able to regain the kingdom of Thessaly for Jason? Sadly, the film doesn’t tell us as it ends right there. I remember hearing somewhere that there were some plans for a sequel that would’ve finished the story, but it ultimately never came to fruition. Jason and the Argonauts is full of spectacular monsters that only Harryhausen could’ve brought to life. My favorites are Talos, the Hydra and especially the skeletons. Harryhausen actually first did a skeleton fight in The 7th Voyage of Sinbad (1958), only that fight was one on one between Sinbad and a skeleton. The movements of the skeletons are so smooth, it’s easy to forget that Jason and the other actors are fighting things that aren’t really there.

Talos is another exciting creation. He’s meant to be an impossibly huge statue of bronze that comes to life to defend the treasure (and he wields a huge sword too). The music for this entire sequence that Talos appears in is absolutely menacing! Bernard Herrmann composed the score for this film and he did such an amazing job of conveying the fact that Talos is big and terrifying and greatly to be feared!!

My one big frustration with this film is that it technically doesn’t finish the story it started telling. The movie starts as a conflict between King Pelias and Jason, the man who will eventually kill him. You would think that the story would end with Jason confronting Pelias with news of his son’s death and that he has the Golden Fleece, but we never get that closure. Regardless, I love watching this movie, as I love watching all films where Ray Harryhausen was involved.

Hope you enjoyed my contribution to the Ray Harryhausen Blogathon, have a good rest of the day!

8 thoughts on “Jason and the Argonauts (1963): Ray Harryhausen Blogathon”