When I think of “classic” science fiction cinema, I inevitably think of two films: Forbidden Planet (1956) and The Day the Earth Stood Still (1951), though regarding the latter, it took me a long time to remember what the film was called. It kept turning out that every time the film was on Turner Classic Movies, I would end up catching it in the middle. So for a while it would be “that movie with Gort in it.” Of course now I know that The Day the Earth Stood Still is so MUCH more than that. 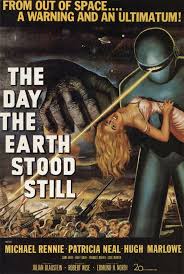 Released in 1951, The Day the Earth Stood Still is set during a time when the Cold War against the Soviet Union (and a fear of Communism in general) is gaining momentum. The score for this film was composed and conducted by the legendary Bernard Herrmann and featured extensive use of the theremin in the opening title. In fact, the score for this film is what inspired Danny Elfman to be interested in film composing.

A strange flying saucer enters Earth’s atmosphere and lands in Washington D.C., where it is quickly surrounded by the Army.

An alien, Klaatu (Michael Rennie), appears and announces he comes in peace. Unfortunately, when he reveals a strange device, one of the soldiers panics and shoots Klaatu in the shoulder, prompting the large robot Gort to emerge from the spacecraft. Surveying the situation, Gort begins to vaporize the weapons with a beam from his “eyes” when Klaatu commands him to stop.

Klaatu is taken to the hospital, but it turns out he is more than capable of healing himself (leaving the poor doctor ready to retire after learning his patient is actually 78 and only in what he considers middle age for his species). Mr. Harley, the secretary to the President arrives, and asks Klaatu why he has come. The mission is simple: Klaatu has an urgent message that must be shared with ALL the governments of the world at the same time. Mr. Harley protests that this will be impossible, and when the authorities prove less than helpful, Klaatu decides to escape and spend some time among the populace, to see if he can learn why the human race is so suspicious. 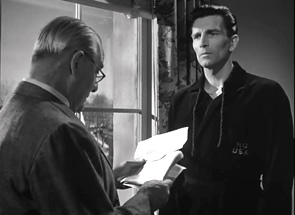 Assuming the identity of “Mr. Carpenter”, Klaatu takes a room in a boarding house where he meets and befriends Helen Benson (Patricia Neal), a widow, who lives with her young son Bobby. The next day, Klaatu lets Bobby show him around the city, where he is visibly disturbed to learn that so many people have been killed due to war. He is also impressed by the Lincoln Memorial (“Those are great words…”) Knowing that his message must still be shared, Klaatu asks Bobby who the smartest man in the world is. Bobby figures that it must be Professor Barnhardt, who happens to live in the city. Finding the professor out, Klaatu leaves a “calling card” by adding in a vital part of an equation (that an ordinary person would not know), knowing that he’ll be contacted as soon as the professor sees it.

Sure enough, the professor and Klaatu end up meeting and the alien shares a small part of his message: If the governments of the world do not listen to him, Earth is at risk of annihilation. This statement terrifies the professor:

“Such power exists?” he asks breathlessly

“I assure you” Klaatu answers “Such power exists.”

Professor Barnhardt promises to assemble as many world scientists at the spaceship as he can, but in the meantime, he thinks it would help if Klaatu were to give a “minor demonstration” of what might happen, but asks also that no one be killed as a result of this “demonstration.” Amused by the challenge, Klaatu sneaks back to the spaceship to prepare for the event, but doesn’t realize Bobby is following him and sees him communicating with Gort.

The “demonstration” turns out to be a total loss of power all over the world (be it motive, electrical, etc.) for precisely thirty minutes (excluding planes in the air or the power necessary to run hospitals). To create a musical sense of the chaos that was happening, Herrmann created a series of tonal clusters (a large series of notes grouped very closely together) and held them out for long periods of time, to create that feeling of static helplessness that almost everyone feels during this period (except for Professor Barnhardt, he revels in the chaos, knowing its source).

Just as the power outage begins, Helen confronts Klaatu about what Bobby told her and while they are trapped in a hospital together, Klaatu confesses everything and asks for her help. Helen promises to do what she can, but there’s a wrinkle, Helen’s boyfriend Tom already believes that “Mr. Carpenter” is the alien and is doing his best to turn Klaatu in to the authorites, believing that this will make him a “big hero.” A disgusted Helen breaks up with him, and the authorities begin to close in on Klaatu’s location.

En route to the gathering of scientists, Klaatu tells Helen that should ANYTHING happen to him, she must go to Gort and tell him “Klaatu barada nikto.” This is because there is “no limit” to what Gort could do, “he could incinerate the Earth.” Before they can reach the spaceship, the Army cuts the pair off. Klaatu runs for it, but is gunned down in the street, prompting Helen to run for the spaceship. And back at that same spaceship, Gort has begun to awaken, sensing Klaatu’s death. When two Army sentries approach, Gort promptly vaporizes THEM (not just their weapons like before). Helen approaches, but is terrified by the huge robot. However, she manages to get the words out just before Gort can vaporize her and Gort responds by taking her to the ship before leaving to retrieve Klaatu’s body.

Back in the spaceship, Helen watches awestruck as Gort begins manipulating a series of dials that begin to heal and revive Klaatu’s body! The alien ultimately returns to life, but it’s not permanent. Even they, as advanced as they are, do not possess “the power of life and death”, as that is reserved for the “Almighty Spirit.”

(On a side note, Michael Rennie absolutely HATED that reference to the Almighty Spirit (it was added by the studio at the last minute, as they felt they were making these aliens out to be gods) as he felt it didn’t fit everything we’d learned about Klaatu and his culture up to that point)

Meanwhile, the crowd of scientists has gathered outside, but the Army is urging them to leave, as they have no idea where Gort is. Just as Professor Barnhardt agrees that they should disperse for their own safety, the spaceship opens up one last time, revealing Helen, Klaatu and Gort. Helen leaves the ship, while Klaatu stands at the entrance to finally deliver his message:

I am leaving soon, and you will forgive me if I speak bluntly. The universe grows smaller every day, and the threat of aggression by any group, anywhere, can no longer be tolerated. There must be security for all, or no one is secure. Now, this does not mean giving up any freedom, except the freedom to act irresponsibly. Your ancestors knew this when they made laws to govern themselves and hired policemen to enforce them. We, of the other planets, have long accepted this principle. We have an organization for the mutual protection of all planets and for the complete elimination of aggression. The test of any such higher authority is, of course, the police force that supports it. For our policemen, we created a race of robots. Their function is to patrol the planets in spaceships like this one and preserve the peace. In matters of aggression, we have given them absolute power over us. This power cannot be revoked. At the first sign of violence, they act automatically against the aggressor. The penalty for provoking their action is too terrible to risk. The result is, we live in peace, without arms or armies, secure in the knowledge that we are free from aggression and war. Free to pursue more… profitable enterprises. Now, we do not pretend to have achieved perfection, but we do have a system, and it works. I came here to give you these facts. It is no concern of ours how you run your own planet, but if you threaten to extend your violence, this Earth of yours will be reduced to a burned-out cinder. Your choice is simple: join us and live in peace, or pursue your present course and face obliteration. We shall be waiting for your answer. The decision rests with you.

The film ends with Klaatu and Gort leaving in their spaceship, a giant question mark hanging over the fate of the human race: will we join this peaceful group of planets, or will we destroy ourselves?

Of course no answer is given, and that frustrated me for years, because I wanted to know how the story was going to end! Except there isn’t meant to be an ending, not like that anyways. The end of Klaatu’s speech was intended as a direct message to the world in 1951: if we don’t stop fighting each other, we’re going to destroy ourselves.

Though it is now over sixty years old, the film is considered a classic and its message is just as relevant today as it was when the film came out. If you haven’t seen this film before, I highly recommend it (and whatever you do, do NOT watch the remake with Keanu Reeves!!!)

Thanks to The Cinematic Frontier for running this great blogathon! -Becky

4 thoughts on “Keep Watching the Skies Blogathon: The Day the Earth Stood Still (1951)”