Well everyone, I have to say you were right. John Wick IS an awesome film and one that I should have seen long before now. It’s not that I didn’t want to see John Wick (or the sequel, which I also watched over the weekend), it’s just that I was buried so deep in paper writing and research three years ago that I simply didn’t have time to go watch much of anything. So, when Black Friday rolled around and the two John Wick films were on sale, I decided to take the plunge and buy them both (having been assured by many people that it was absolutely worth it).

And the very first impression from this film? (This will surprise nobody): That poor puppy!!

Even though I knew going in that this part was coming, I still almost couldn’t go through with it when John received the puppy as a final gift from his recently deceased wife. I absolutely adore animals, and every time that puppy looked up at John, my heart just melted (to the point where I had to hold my own pet close just to get through what came next). Mercifully, the final scene with the puppy was kept short or I’m not sure I could’ve kept going. But I’m getting ahead of myself: for those who may not know, the film starts with a battered John falling out of a shot-up car by a waterfront before jumping back a few days to the day of his wife’s funeral. In a series of flashbacks, we see John reminiscing over anniversary celebrations, dates, ending with his beloved collapsing on a boardwalk and ultimately dying in the hospital (I suspect an aggressive cancer, but no cause is given as of yet). 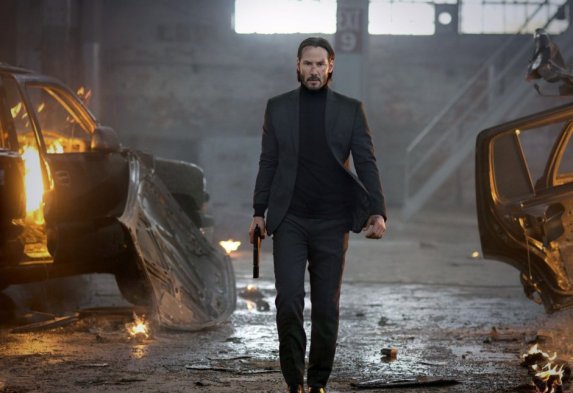 The puppy is delivered that evening and a card (from his wife) explains that this is to help him learn to love again and not to be alone. John is adjusting to this new life with Daisy (named after his wife’s favorite flower) when he encounters some Russian gangsters at a gas station. One, Iosef (Alfie Allen, aka Theon Greyjoy from Game of Thrones) admires John’s car very much and asks how much he will sell it for. John insists it is not for sale and heads home. But that night…Iosef and his friends break into John’s house, assault him and, out of pure spite, kill the puppy. From this point on, the story is a pretty violent roller coaster ride because…it turns out that Iosef has unwittingly pissed off one John Wick, formerly the greatest assassin the criminal underworld had ever seen and (a rather important detail) a former employee of Iosef’s father. Just over five years ago, we learn, John informed his employer that he wished to “get out” of the business as he’d fallen in love. Victor (his employer) informed him that if he wished to leave he would need to complete an impossible task (I believe it was killing all of Victor’s enemies in a single night). That being done, John retired and was left in peace, until now.

This is actually one of my favorite story tropes: dumb criminal pisses off the legendary assassin/fighter/etc. and it’s just a matter of time until he pays with his life. In John’s quest for vengeance, we get introduced to the remarkably civilized underworld, where assassins and other types use strange gold coins as currency, cleaning up the bodies is referred to as “dinner reservations” and there are exclusive hotels for assassins. Indeed, the Continental Hotel in New York City caters to everyone in the Underworld (provided you’re in good standing) but there is one cardinal rule that everyone must follow: no “business” may be conducted on hotel property. That means, even if your target is standing right in front of you in the lobby, you can’t kill them (if you do or if you try anyway, there are severe consequences). I liked this part because it is always interesting to imagine that a secret world exists in plain sight like the one depicted in the film. Access is dependent on the gold coins, no coins, no admittance.

Knowing that John will be coming for his son, Victor puts a $2 million dollar hit out on his former employee. He also specifically goes to Marcus, John’s former mentor and personally asks him to take John out. Marcus says it will be done, but he’s lying. Instead of killing John (which he has several opportunities to do), Marcus is seen watching over John, preventing others from taking him out. This includes stopping a fellow assassin, Ms. Perkins, from killing John inside the hotel (Victor offered double the bounty to anyone willing to break the rules). It takes some time, but Ms. Perkins ultimately pays for this violation (she also killed another assassin inside the hotel after John stopped her) with her life after Winston, the hotel’s owner, revokes her membership.

After destroying a lot of Victor’s assets, John finally convinces him to reveal where his son is hiding out, with the understanding that this will stop all further acts of vengeance. But while John goes to kill Iosef (successfully I might add), Victor corners Marcus for not killing John when he had the chance and after torturing him extensively, shoots him dead in his own home. This prompts John to turn around (literally) and head off for one last showdown. By the time Victor is disposed of, we’ve caught back up to where the story began, with John beat up on the waterfront. He patches himself up in a vet’s clinic, but before he leaves, he saves a puppy that was scheduled to be put down and takes him home (which made my heart melt again). 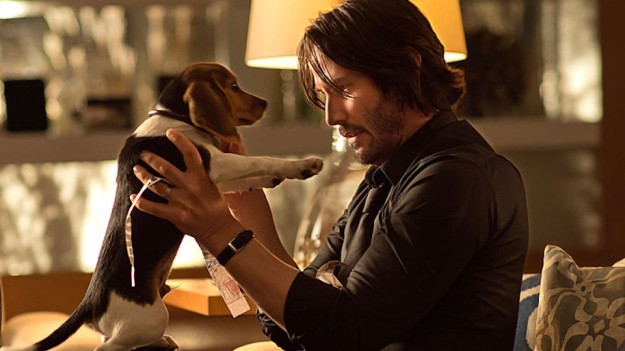 By the time the credits rolled, I was deeply in love with this movie, not to mention grateful that I’d thought to buy the sequel as well. One of the things I loved in the story is that every time John Wick is mentioned as being part of the scenario, all anyone can think to say in response is “Oh.” Like, just hearing Wick’s name explains everything about the situation (this carries over into the sequel as well). I also liked how the action was almost non-stop once that part of the story got rolling, there are very few moments where you are allowed to catch your breath once the violence starts.

In conclusion: John Wick is an awesome film (with an awesome sequel) and I eagerly await the final installment (due in 2019) that I will definitely be seeing in theaters. Tomorrow I will publish my thoughts on John Wick: Chapter 2. Until then!