Thirty years after the so called “Golden Age” of Disney ended with Sleeping Beauty, the studio leapt into a new age of glory with the premiere of The Little Mermaid in 1989. Loosely based on Hans Christian Anderson’s fairy tale of the same name, the film raised animation to a whole new level. As a very young child, I lived and breathed The Little Mermaid, following Ariel’s adventure with rapt attention. And yet…after seeing the film a hundred times, something strange began to happen: I didn’t enjoy the film as much, in fact I became downright scared of it and would rather watch anything but that film!

Being only three, my fear was attributed to the scariness of Ursula at the climax of the film, and this is partially true. But even before Ursula transformed herself into a colossus, I developed a fear of an entirely different scene. Now that I’m grown up, I look back at this scene and recognize the disturbing elements that led me to reject this scene and ultimately the film as a child. And that scene is King Triton’s destruction of Ariel’s grotto.

Ariel, the youngest daughter of King Triton, keeps many secrets from her loving but overprotective father. The biggest of these secrets is that she has a secret grotto full to the brim with human artifacts that she has salvaged from various human shipwrecks on the ocean floor. This is a huge problem because Triton has strictly forbidden contact with anything from the human world, up to and including anything made by humans. Sebastian, Triton’s court composer, discovers the grotto during “Part of Your World” but is initially persuaded by Ariel to keep it a secret. But when it becomes clear that Ariel has fallen in love with the human Prince Eric, Sebastian reluctantly informs King Triton of the truth. 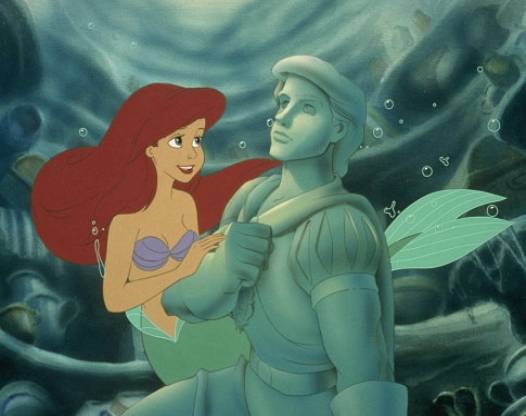 Triton’s confrontation with Ariel coincides with Flounder surprising his best friend with a statue of Prince Eric that was on the shipwreck that Ariel saved the prince from earlier in the film. The princess is delighted with her present and she twirls about in delight, only to come face to face with her very angry father. As a single father, King Triton has done his best to raise seven daughters, but Ariel’s stubbornness has him at his wits end. He tries, as best he can, to convince his daughter that her love for the prince can’t possibly come to anything, that humans are dangerous. As the famous line goes “Have you lost your senses completely? He’s a human, you’re a mermaid!” When Ariel retorts that she doesn’t care (about the difference), Triton decides desperate measures are in order.

“So help me Ariel, I am going to get through to you. And if this is the only way, so be it!”

What follows disturbs me to this day. Full of anger, King Triton proceeds to destroy most of the grotto, with several shots devoted to various items disintegrating from the power of the trident. That part alone is heartbreaking because we already know Ariel loves her collection very much. But what makes this scene disturbing is how Triton changes. As he finishes the line with “so be it”, the glow of the trident first under-lights his face, creating a scary look. Then, for the rest of the destruction, the king is drawn as a dark figure surrounded by a dark red background, destroying everything in spite of Ariel’s anguished pleas for him to stop.

This is disturbing because, for this moment, Triton has become a monster in the eyes of Ariel and the audience. Fathers aren’t supposed to hurt their children, even if they have done something wrong. And while it is true that Triton did not lay a hand on Ariel, destroying her prized possessions right in front of her must have done severe psychological and emotional damage.

To be fair, Triton expresses remorse almost immediately afterward, as he is seen glancing back with sadness when he hears Ariel sobbing, but nevertheless, the damage is done. Ariel’s private sanctuary has been destroyed, and she doesn’t feel like she can trust anybody since Sebastian betrayed her secret. Hence, this is the perfect opportunity for Ursula’s hench-eels, Flotsam and Jetsam, to sneak their way in and invite Ariel to visit their mistress.

What do you think of Triton’s destruction of the grotto? Did he go too far? Did you find it disturbing as well? Let me know your thoughts in the comments below!