It has been a very long time since I went to see a film set in the Marvel Cinematic Universe. Due to burn-out and other situations, I believe the last film I went to see was Avengers: Age of Ultron all the way back in 2015. I truly thought I was permanently burned out on the MCU until I saw the first teasers for Black Panther late last year. Something about the film kept drawing me in, as much as I tried to ignore it. Then, when the first reviews came out critically praising the film as a masterpiece, I knew that I would have to go and see for myself.

The critics are right. Black Panther IS a masterpiece. In fact, I’d go so far as to say that this is the best film in the MCU to date (though Avengers: Infinity War might claim that title once it releases in May).

As far as I can tell (my knowledge of the MCU timeline isn’t the best), Black Panther picks up about a week after the events of Civil War, during which time T’Chaka, the king of Wakanda, was assassinated in an explosion at the United Nations. His son T’Challa is set to be crowned king and fully come into his rights as the Black Panther that protects Wakanda from the outside world. A beautiful prologue explains that Wakanda was built over a huge meteorite of vibranium that crashed into the Earth. Because the vibranium allowed Wakanda to build and work with technology that far outstripped the rest of the world, the nation hides in plain sight, posing as a Third World country while it is actually the most advanced on Earth.

I think my favorite scene in the whole film is when T’Challa (Chadwick Boseman) is returning to Wakanda with Nakia (an ex-girlfriend) for his coronation. The ship they’re flying on appears to be heading straight into a mountain when at the last second it’s revealed to be a hologram! The facade melts away to reveal this beautiful city full of flying ships, mag-lev trains and of course the enormous vibranium mine (overseen by a huge panther statue). The entire city is a perfect example of Afro-Futurism, combining traditional African designs with futuristic technology (it’s sheer perfection to watch).

Enter Erik Killmonger (Michael B. Jordan), my new favorite villain in the MCU (sorry Loki). Erik is introduced as an associate of Ulysses Klaue (whose vibranium stealing exploits have been a thorn in Wakanda’s side for thirty years). It turns out that Killmonger is actually the son of T’Chaka’s brother. When Eric was a young boy, T’Chaka confronted his brother over helping Klaue steal vibranium and was forced to kill him. But the real tragedy of the situation emerges when it is revealed that T’Chaka chose to leave his nephew behind, rather than take him back to Wakanda. Is it any wonder that Erik is bitter and seeks to rule Wakanda as its rightful king? 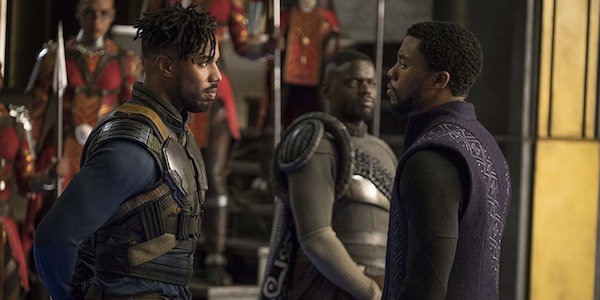 Killmonger fascinates me because his motives are so complex. He genuinely believes that he knows what’s best for Wakanda. The young king, knowing who Erik is, doesn’t want the truth coming out in front of his council, but it does anyway. Aside from being stunned to learn that there’s a royal cousin that nobody in Wakanda knew about, they agree that Erik is fully within his rights as a royal prince to challenge for the throne by ritual combat. And this led to my other favorite scene: as Erik and T’Challa fight, Erik spells out why he is the better king for Wakanda, revealing that he has killed many, many times (and for each kill there’s a self-inflicted scar on his body).

I found the clash between Erik, who grew up in America, and the culture of Wakanda to be enthralling. Now I understand the article titles I saw that mentioned the conflict between African-Americans and Africans. Even though they have a common origin (in Africa), the way they grew up almost guarantees they’ll be nothing like each other, and so it is with T’Challa and Erik.

Another part of the film that I absolutely loved are the Dora Milaje; an all-female squad of elite warriors that protect the king of Wakanda at all times. They’re led by Okoye (Danai Gurira, aka Michonne on The Walking Dead!), an absolutely bad-ass warrior who will not hesitate to attack her enemies with a spear. Their fighting style is thrilling to watch; they move with such precision and grace that you can’t doubt their lethal abilities.

Aside from T’Challa himself, I absolutely loved his little sister Shuri (Letitia Wright). Though only 16, she’s in charge of Wakanda’s technological developments, which also include providing updates to the Black Panther’s suit and weapons. It’s hinted that she can fight as well, but it doesn’t come out until the big fight at the end when she emerges with Nakia in fighting armor and wreaks havoc on the enemy. I definitely want to see more of Shuri (and Wakanda in general) in the MCU.

Final thoughts: Black Panther is without a doubt the best film produced for the MCU yet. It’s a compelling story, without any flaws that I could find. Definitely go see it!

What did you think of Black Panther? Let me know your thoughts in the comments below 🙂 As always, thank you for coming by and checking out the blog, your support means everything to me!