Gate of Hell (Jigokumon) is a 1953 jidaigeki film directed by Teinosuke Kinugasa. It was restored and released on DVD by the Criterion Collection in 2013. The film tells the story of a samurai (Kazuo Hasegawa) who falls in love with a married woman (Machiko Kyō).

I’d honestly never heard of this film before a few weeks ago, so when I found a copy of the film at the local bookstore, I decided to buy it and give it a try. I’ve since learned that this was the first Japanese color film to be released outside Japan and it won the Academy Award for Best Costume Design. Unlike other jidaigeki I’ve seen which are set in the Edo period (1603-1868), Gate of Hell is set during the Heiji Rebellion in 1160. When the palace is attacked by rebels, Morito (Kazuo Hasegawa) is assigned to protect Lady Kesa (Machiko Kyō) who is acting as a decoy for the queen. Morito is clearly smitten by the beautiful lady, and when he is offered a boon in return for his loyal service, Morito asks for Kesa to be his wife. There’s just one small problem: Kesa is already married! Morito refuses to give up however and continues to obsess over making Kesa his, despite the lady making it pointedly clear that she is not interested in him.

The story definitely plays with your expectations as to who the hero of the story is. Initially, Morito is presented as a heroic figure who refuses to give in to treason and defends Kesa as best he can. But once he’s informed that Kesa is already married and he can’t have her, Morito changes from possibly being a hero to a selfish, unreasonable creep! And what makes the story worse is, for most of the film Kesa seems to be the only one who understands just how much trouble Morito is! Wataru, her husband, and the other court officials seem convinced that all of this will blow over once it sinks in with Morito that Kesa does not love him back, but if anything it makes his obsession with her even stronger.

The film contains some beautiful scenes of Kesa playing the koto, a traditional Japanese stringed instrument. The one I’d like to highlight is when Morito is given one chance to pour out his heart to Kesa and see if she returns his feelings. She is playing the koto when Morito comes into the room and though he asks her to stop playing (so he can talk), she makes her feelings clear by refusing to stop and playing more and more elaborate music that only ends when Morito smashes the instrument. 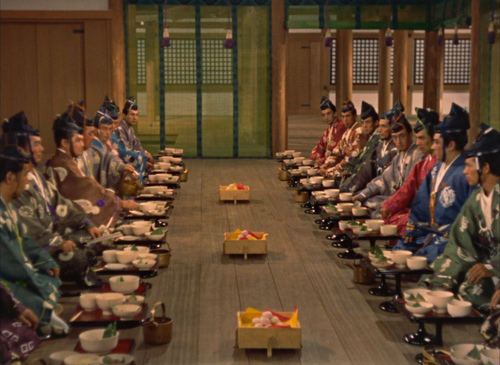 I’m mostly satisfied with how the film ends, though part of me believes Morito should have paid with his life. Let me explain: the story comes to a head when the samurai corners Kesa at her aunt’s home and gives her an ultimatum: either Kesa goes with him or he will kill her husband, her aunt and even Kesa herself. Seemingly defeated, Kesa agrees and a plan is set: Kesa will blow out the light in her husband’s room at midnight, which will be Morito’s signal to run in and kill him. But it’s really a trick, Kesa gets her husband to sleep in her room while she lays down in his. Thus, Morito kills her, removing Kesa from his grasp forever. But instead of getting killed by her husband or even being hauled away for a trial (because he killed an innocent woman for crying out loud), he’s spared because killing him “won’t bring Kesa back.” And so Morito cuts off his top knot and vows to become a monk. I sort of understand why Wataru didn’t kill him, but I still would have liked to see him be punished somehow for killing Kesa (and no, I don’t think losing his samurai status is punishment enough).

The colors in this film are absolutely beautiful, Kesa’s kimonos draw your eye no matter where she is in the shot. There’s also a fabulous horse race scene that is fun to watch. All in all, Gate of Hell was a good purchase and is a worthy addition to my collection of Criterion films.

Have you seen Gate of Hell? If you have, let me know what you thought about it in the comments below and have a great day.