John Constantine’s latest animated adventure, Constantine: City of Demons, has finally come to Blu-Ray/DVD and I couldn’t be more excited about it. As long-time readers of the blog know, I’ve been obsessed with Matt Ryan’s incarnation of the character since his short-lived television series went off the air (NBC wouldn’t know a good thing if it went up and bit them, sorry, still bitter). While I’m happy that Constantine is now a regular part of Legends of Tomorrow on the CW, there’s still not enough Constantine out there so I was beyond happy to sit down last night and watch this new story. It was originally released on CW Seed as a series of mini-episodes (6-7 minutes in length) earlier this year but for the DVD release everything was joined into one feature (along with 20 minutes of extra content).

Set in the same universe as Justice League Dark (2017), though it’s unclear if this happens before or after that story, City of Demons sees the infamous John Constantine travel to Los Angeles on a mission to save Trish, the daughter of his best friend Chas. Somehow her soul has gone missing and Constantine vows to get it back. But there’s a big obstacle standing in his way: a demon named Beroul is using Trish’s soul to open a “branch office of Hell” (quite literally, a miniature version of Hell only it’s on Earth). To get Trish’s soul back, Constantine is ordered to take out Beroul’s demonic competition.

This story is full of twists and turns that keep you on the edge of your seat until almost the very end of the story. Aside from the main plot involving Trish’s soul and Beroul, the infamous Newcastle incident is recounted in bloody detail and it goes a long way toward explaining how Constantine got to be how he is. And that’s one other thing about City of Demons that you need to know: it is extremely bloody and graphic (it’s rated R for good reason). In particular, be aware that when Constantine visits Beroul for the first time you will see some pretty twisted and graphic images (which makes sense given he’s recreating Hell but still, I figured a fair warning was in order). 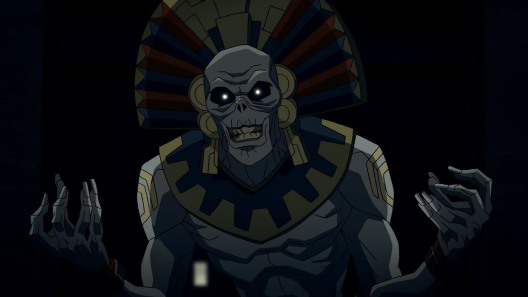 City of Demons introduces several new characters to the world of Constantine, including Asa the Nightmare Nurse (pretty sure she’s a demon); Angela (I can’t say more about her because I don’t want to spoil it for you), an ancient Aztec god and….one interesting character in particular that brought a genuine gasp out of me when he was revealed. I won’t say who because it spoils the climax but I will say that by the end of the story Constantine does find some small measure of closure as far as his past is concerned. Matt Ryan is brilliant as always as the master occultist and I’m more excited than ever to see him return to Legends of Tomorrow.

For a moment, I was certain the story was going to end on a cliffhanger that would hook into a sequel; but as the story ends with things more or less back to a status quo, I can’t help but wonder where Constantine will go from here. Hopefully this is not the last we see of the Brit in the animated DC universe (I’m still hoping for a sequel to Justice League Dark). At any rate, if you enjoy the adventures of John Constantine, you will love Constantine: City of Demons. If you have seen it, let me know what you think about it in the comments below and have a great day!