The 1986 film Castle in the Sky (Tenkū no Shiro Rapyuta) holds a very special place in my heart. Not only is it the very first Studio Ghibli film, it is also, so far as I can remember, the very first film by Hayao Miyazaki that I ever saw. I saw it on TV in the early 2000s (2003 I think), and it was played up as a really big deal. I remember being spellbound then, and ever since I’ve been in love with this story.

Like all of Miyazaki’s films that I’ve seen, Castle in the Sky takes place in a world not unlike our own, but with one major difference. In this world, there’s a huge floating city named Laputa that lies hidden somewhere up in the sky. Long ago, Laputa was the center of an incredibly advanced civilization, but hundreds of years ago…it vanished. The story centers around several groups and individuals who are all searching for Laputa, each with their own motives for doing so.

Castle in the Sky is an interesting study on the best and worst aspects of humanity. On the one hand, we have Pazu and Sheeta, who only want to explore Laputa, and don’t really want to “do” anything with it. The Dola Gang are something of a middle ground, in that robbing the city of its treasures isn’t really the right thing to do, but then again they’re just doing what pirates do (and it’s implied that they’ll retire from their thieving ways if they succeed). 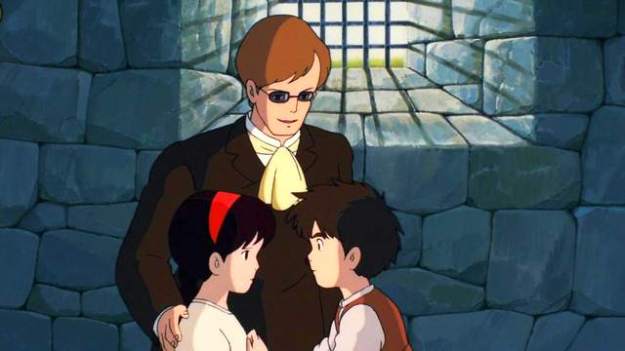 And then there’s Muska, who represents the very worst of humanity. Muska, who like Sheeta is descended from Laputa’s long-lost royal line, is obsessed with getting to the floating city and turning it into his own personal kingdom and weapon of war. He believes that since Laputa once dominated the world, there’s no reason why it shouldn’t do so again, with himself as its king. Of all the characters who make it to Laputa, I think Muska is the only one who bothers with its technological secrets, most of which have been nearly buried underneath a forest of roots and plant life in the centuries since the residents returned to Earth. In fact, Muska is so obsessed with wielding advanced technological power and being king that he completely misses the point of why the city was abandoned in the first place. Sheeta tries to explain it to him: the city was abandoned because its residents realized that humanity doesn’t belong in the sky. All the advanced power in the world doesn’t mean a thing if you aren’t connected to the world, to which all things belong.

Speaking of Laputa, the city is one of my favorite parts of the film. It’s so well drawn that, even though most of it has long since fallen into ruin, you can still conceive of how it must have looked in its prime. I also like the idea that the floating city is home to wildlife that you wouldn’t find on Earth (at least I think that’s what those creatures are meant to be). It’s literally like a whole different world up there.

If you haven’t seen Castle in the Sky yet, I highly recommend it, it’s a classic story that doesn’t show its age in the slightest.

Let me know what you think about Castle in the Sky in the comments below and have a great day!

My Neighbor Totoro (1988): One of My All Time Favorite Cartoons Blogathon