Earlier, during the holidays, I sat down and watched the 1984 version of A Christmas Carol, with George C. Scott starring as Ebenezer Scrooge. As near as I can remember, this is the first time I’ve ever seen this particular version of the story, which is by far the most complete version of “A Christmas Carol” that I’ve seen to date. For context, I should mention that the version I’m most familiar with are Mickey’s Christmas Carol and The Muppet Christmas Carol, both of which are good but they also leave out quite a bit of material as I’ve now discovered. 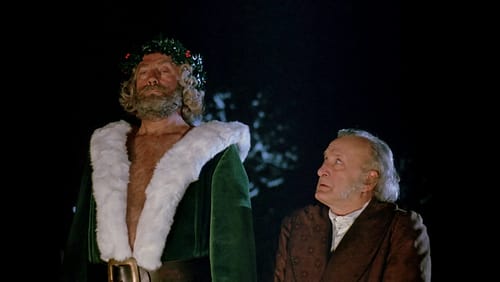 A Christmas Carol includes sequences and details I never knew about before, including Ebenezer’s beloved sister Fan, and the fact that her untimely death is why Scrooge isn’t particularly fond of his nephew Fred (most versions I’ve seen omit that detail). And then when Scrooge is spending time with the Ghost of Christmas Present, I never knew he visited his nephew Fred’s home and watched them play games. All of these details have really expanded the story for me and made me love it that much more. This film also, in my opinion, has the scariest incarnation of The Ghost of Christmas Yet to Come that I’ve seen in a long time. To be sure, I haven’t seen a version yet that doesn’t have a scary version of this character, but this one is particularly dark.

I also really enjoy George C. Scott’s interpretation of Ebenezer Scrooge. I know many famous actors have taken on the role, and given that I only know Scott best for his work in Patton, I wasn’t sure how he would do playing Scrooge. But after watching this film, I found myself really enjoying his performance. Scott’s version of Scrooge is particularly cold and nasty in the beginning, and even after being visited by the first two Ghosts, Scrooge doesn’t seem particularly close to being redeemed. It’s only after being visited by the terrifying Ghost of Christmas Yet to Come (who can only communicate with terrifying metallic shrieks), that Scrooge finally sees the error of his ways.

If you’re looking for a version of “A Christmas Carol” that is particularly faithful to the original story, then you can’t go wrong by watching this one. Let me know what you think about it in the comments below and have a great day!