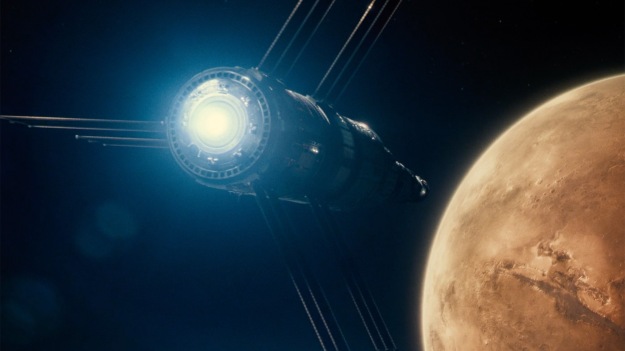 *warning: spoilers down below for Aniara. If you don’t want to know, stop now!

As one who specializes in science-fiction film, I’m always on the lookout for new entries in the genre. From the moment I saw the first trailer for Aniara, a Swedish film based on the epic poem of the same name, I knew this was a film I would need to see. While a theatrical viewing was unfortunately denied to me, I was able to pick up the film on DVD and I finally sat down to watch it last night. Ever since the credits began to roll, I’ve been struggling with how to start this review, but I think I’ve finally found a place to start:

Relatively early in the film, the captain of the Aniara (a super-large spaceship that reminds me in many ways of a cruise ship but in space) remarks that they’ve essentially made their own planet. Assuming he’s correct, if the Aniara is meant to represent humanity in microcosmic form, then humanity is well and truly f*cked.

I’ve honestly struggled with this type of film in the past; those stories that are built on the idea that when things go wrong humans lose their sanity and go tribal before perishing altogether (High-Rise is built on a roughly similar premise, albeit on a much smaller scale). But now, after watching Aniara, every last horrifying minute of it, I think I’m beginning to understand why and how this particular story came about. At one end, it does seem ridiculous for the passengers to behave in this fashion, but then again, there’s no telling what you might do if you learn you’re now trapped in space for the rest of your life. Furthermore, the passenger’s actions are meant to highlight the inherent failings in humanity in general. Humans can’t handle not being in control. Place them in a vulnerable position long enough…and it all goes to pieces, quite literally.

Words can barely describe just how depressing Aniara is. The film wastes little time in beginning the death spiral of however many passengers are now trapped on the ship. Even worse, much of what happens is left to the viewer’s imagination. We know at the start that the ship is full of people both very young, and very old, yet by the end of the film (when MR gets her medal), the population has decreased significantly. Where did they all go? There are hints throughout, most of them quite gruesome in nature.

All of that being said, it seems strange that all of this would start with something as small as a screw (or whatever small debris impacted the ship). If the story has one failing, it’s that the event that sets off the plot seems so…unbelievable. Even the captain calls it “something incredibly unlikely” and it just seems strange that such an advanced vessel could be damaged so catastrophically just like that. Where are the backups, where’s the reserve fuel? What space vessel keeps ALL of their fuel in one place? The only thing that bugs me more is why couldn’t the Aniara simply radio Mars for help? If humans have developed the means to establish colonies on Mars and travel there in less than a month, surely communication with the red planet was possible (or perhaps not, it’s possible I missed a detail). All I’m trying to say is, it almost feels like the Aniara is set up to fail from the start.

I’ll close by mentioning the one image that will stick with me for a very long time. At the very end of the film, the last we see of the Aniara is that everyone on the ship is long since dead (we’ve jumped millions of years into the future by this point). In a scene I’ll never forget, the air is full of swirling debris (the artificial gravity has long since failed) and detritus. The only sign that humans were ever onboard is a human jawbone spinning through the air. As horrifying as that image is, it speaks volumes as to the fate of humanity that Aniara wants to share. For all of our accomplishments, everything humanity has done, ourselves included, will one day return to dust, and ultimately that’s all we will be. That’s why I said at the start, if Aniara is humanity in a microcosm, we are f*cked indeed.

Let me know what you think about Aniara in the comments below and have a great day. If you haven’t been able to see it, be aware that there is an English language option available so you can watch without staring at subtitles all of the time.