The 1938 film The Adventures of Robin Hood is the epitome of the perfect swashbuckler film: there are exciting sword fights, an archery tournament, a great ambush in Sherwood Forest and an A-list cast led by Errol Flynn as Robin Hood himself. But this film is also notable for highlighting a real life feud between two royal brothers, namely Prince John and his older brother King Richard “the Lionheart”. 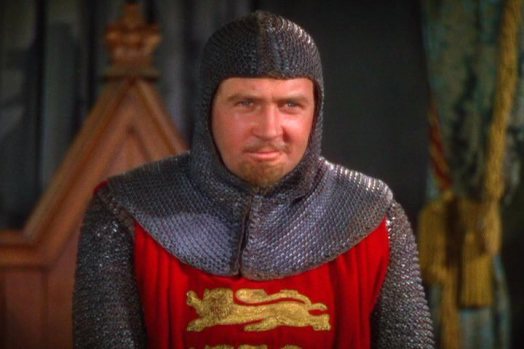 The story begins when news arrives that King Richard has been taken prisoner  by Leopold of Austria while returning home from the Third Crusade and is being held for ransom! This is indeed what happened to the historical King Richard: during the crusade, Leopold had been insulted when Richard had replaced the Austrian banner with his own and so when Richard was returning back to England, he took the opportunity to capture him for his own personal revenge (never mind that those returning from crusade were not to be harmed in any way). 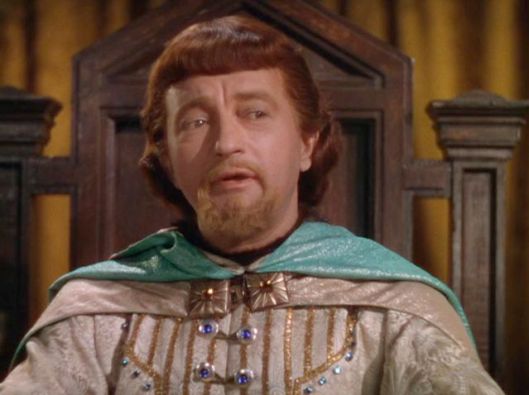 Back in England, Prince John, brilliantly performed by Claude Rains, is gleeful at the idea that his older brother is out of the way for the foreseeable future. It’s no secret that John and Richard never got along very well (if at all), as John resented Richard for being favored by their mother Eleanor of Aquitaine. With Richard gone, John disposes of Longchamps (the man assigned to co-rule England with John in Richard’s absence, not all of England, as the film implies) and sets himself up as ruler of England.

This proves to be disastrous for the common folk of England as John begins to tax them ruthlessly. Ostensibly, this money is for Richard’s ransom, but John has no intentions of helping his royal brother get free. Instead (the film never mentions this but it’s a historical fact), John plans to use this money as a bribe to KEEP Richard locked up, at least until he can secure the throne for himself.

The plan is working beautifully until Robin of Loxley, a Saxon knight, gets tired of seeing his people oppressed and vows to do something about it. After fleeing Nottingham, Robin sets up a hideout in Sherwood Forest and gathers a huge company of outlaws who wreak havoc with Norman tax collectors (and wealthy Normans in general) any chance they get. The culmination of all this is when they take Sir Guy and Lady Marian captive and force them to have dinner with them in the forest (Marian ends up enjoying herself, while Sir Guy just fumes the whole time). While this film greatly highlights the tension between the Norman and Saxon populations, I should note that by the time of King Richard’s reign in real life, these tensions had all but vanished (it just made a good plot device for the movie).

There is a third royal (of sorts), in this mix, the Lady Marian Fitz-Walter (Olivia DeHavilland), the royal ward of King Richard (and Prince John in his absence). Being a royal ward means that your parents are dead or unable to care for you, and your education and marriage and general well-being are the responsibility of the king. John plans to use this to his advantage by trying to match Marian with the handsome (but lethal) Sir Guy of Gisbourne (Basil Rathbone). It almost works too, until Robin interrupts the feast at Sir Guy’s castle in Nottingham and Marian gets a good look at the Saxon rogue.

While Marian and Robin slowly build a romance together, John proceeds with his plans to take the throne for himself, plans that are accelerated when the Bishop of the Black Canons reports that he’s spotted Richard himself in England (how and when Richard got back to England is never said). Desperate, John plots to have Richard murdered and himself proclaimed as King in two days time. Marian (fortunately and unfortunately) overhears all of this and writes a warning for Robin so that he can save the King. However, Sir Guy, Prince John and the Bishop noticed Marian overhearing, so Sir Guy catches her red-handed with the warning letter. This leads to a summary trial where Prince John condemns her to death. When Marian protests that John can’t order her execution because “only the King himself has the right to condemn me to death”, John states that it shall be a King who gives the order, implying that as soon as he is crowned, Marian will die.

Of course Robin gets word of what’s going on regardless and moves to save Marian, but not before meeting three mysterious monks in the woods. Of course, these aren’t monks at all but King Richard and two of his knights in disguise! Richard had been trying to find Robin Hood for quite some time, but when he noticed that the outlaws tended to show up for rich abbots/monks, he decided to go in disguise to grab his attention. Robin (and all the outlaws) are naturally overjoyed that King Richard has returned, but there isn’t a lot of time to waste: John is going to be crowned the very next day and he’s got to be stopped! Of course, Robin has a plan on how to do that…

As majestic as the coronation scene looks, there are a host of errors that make it completely implausible as well. First of all, a mere bishop cannot possibly crown Prince John, it has to be the Archbishop of Canterbury. Second, coronations are always held in Westminster Abbey; Prince John may be a prince of England, but even he can’t order a coronation where and how he pleases, the other nobles wouldn’t have accepted it! Errors aside, it is a grand sight to see, with the bishop marching in followed by altar boys and hundreds of fellow monks (you’d think they’d have gotten suspicious with so many monks tagging along).

At the last moment, King Richard reveals himself when John tries to proclaim himself king, answering “Aren’t you a little premature brother?” Bedlam ensues in the form of a gigantic sword fight while Sir Guy and Robin separate to have their long awaited reckoning with one another.

Happily, the good guys come out victorious, Prince John is banished from England for the rest of King Richard’s lifetime (which would be less than ten years) and Robin is “ordered” to marry the Lady Marian, to which Robin can only say “May I obey all your commands with equal pleasure sire!”

While coming up a little short in the historical accuracy department, The Adventures of Robin Hood still gives a great look at two of England’s most well known royals: the noble King Richard and the ever-despised Prince John.

Enjoy the rest of the Royalty on Film Blogathon! And please check out The Flapper Dame’s great blog if you haven’t already 🙂

*all images are the property of Warner Bros. Studios