The final act of Bambi does not lack for ‘disturbing moments’ especially when you consider that in short order: Man attacks the forest en masse, causing total hysteria among the animals; Bambi gets shot; and the entire forest is set on fire, compelling the surviving forest creatures to run for their lives. But the moment I would like to focus on happens in the midst of all this, during Man’s attack, but before the forest is set on fire.

Due to a series of events, Bambi and Faline have become separated and in the chaos are frantically searching for each other. And during a sudden lull in the shooting (which in retrospect is a sign that things are about to get worse), Faline bounds over a hill only to discover…the dogs. And just calling them ‘dogs’ alone is an understatement, these are killers!! I mean look at them: fangs bared, angry eyes, these dogs will rip apart anything they can catch, including Faline!! What makes this moment disturbing for me is that regular dogs have been turned into savage monsters by the studio. This, combined with the heart-pounding accompaniment of chase music, adds up to a scene that had me simultaneously engrossed and terrified.

The scariest (and most disturbing part) comes when the dogs have Faline cornered on a tiny ledge: 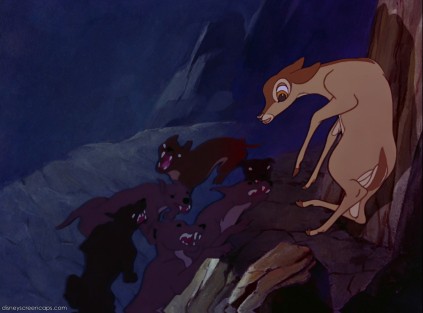 It’s a terrifying scene: only a few inches of rock are keeping Faline from those dogs and they’re not giving up! I’m very thankful this scene did not traumatize me for life in regards to dogs (because it could very easily do that).

Thankfully, Bambi comes to rescue Faline and the danger passes. And yet…the image of those dogs lunging up at Faline has stayed with me for a very long time. What do you think of the scene where the dogs hunt and chase Faline? Let me know in the comments below 🙂

Become a Patron of the blog at patreon.com/musicgamer460
Check out the YouTube channel (and consider hitting the subscribe button)