I’m currently on a mission to catch up on films I wanted to see earlier this year but for whatever reason was unable to. First on this list was The Death of Stalin, a political satire comedy directed by Armando Iannucci (Veep). As the title implies, the film is about the death of Russian dictator Joseph Stalin in 1953 and the power struggle that took place in the aftermath. 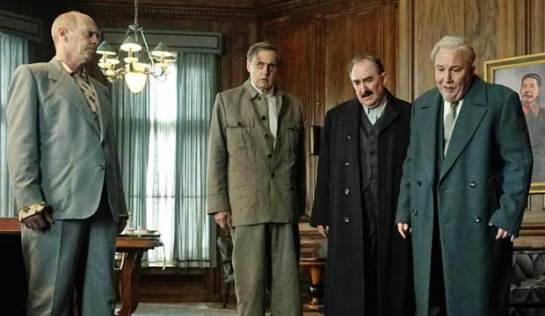 The bulk of the film consists of a struggle for power between three men: Nikita Khrushchev (Steve Buscemi), Lavrentiy Beria (Simon Russell Beale) and Georgy Malenkov (Jeffrey Tambor). There are plots, struggles to win the trust of Stalin’s children Svetlana and Vasili and political hoop-jumping that boggles the mind if you try to follow the character’s logic. While I can’t say the film bored me, I also didn’t find it particularly funny. Perhaps I approached the film in the wrong state of mind, but the humor just didn’t come across to me. To be sure, I could tell when they were going for a humorous moment (such as the scene where everyone’s carrying Stalin’s body to his bedroom), but I never really felt the urge to laugh. There’s one exception: at the very beginning of the film is a hysterical moment when, just after a concert has concluded, Stalin calls and asks for a recording to be brought to his residence. There’s just one problem, the concert wasn’t recorded! So the panicked head of the radio station makes the audience sit back down and has the orchestra play the concert all over again just to satisfy Stalin (and to make sure he isn’t shot). 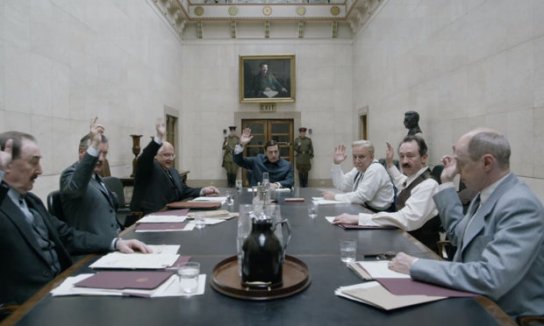 It also felt really strange to watch a film set in Russia with no one speaking in a Russian accent. According to the trivia, this is because the director didn’t want the actors to have to worry about forgetting to maintain an accent, especially if/when they ad-libbed. While I understand the reasoning, it still served as a big distraction for me.

In the end, I don’ regret watching The Death of Stalin, but I also have no desire to watch it again.

What did you think of The Death of Stalin? Let me know your thoughts in the comments below and have a great day!