On this day in film history, Shrek 2 (2004) came bouncing into theaters. Like the original, Shrek 2 received extremely positive reviews and proved to be the most profitable film in the series until Shrek the Third (2007).

As the story opens, a mysterious figure makes its way to Fiona’s castle, boasting all the time about how he’s going to rescue the princess (having no idea that this has already happened long since). Instead of meeting Fiona, Prince Charming (yes, that’s really his name) meets the Wolf from Little Red Riding Hood, who informs him that Fiona is already on her honeymoon. (During the honeymoon montage, Shrek ends up being kissed by a red-headed mermaid that is likely a reference to Disney’s Ariel because we never see her face (Fiona drags her away and throws her to the sharks first)). 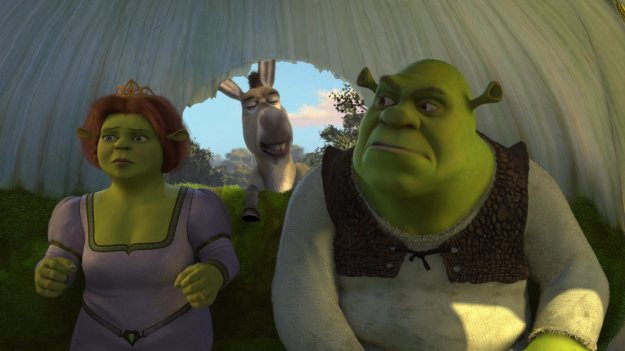 As Shrek and Fiona return from said honeymoon, they get an unexpected message from Fiona’s parents, the King and Queen of Far Far Away (as in “once upon a time, in a land far far away), who want to see their daughter and her new husband at once. They eventually go, but things are decidedly awkward as no one was expecting Fiona to have married an ogre.

Meanwhile, it turns out that years ago, the King of Far Far Away (John Cleese) made a deal with the Fairy Godmother (Jennifer Saunders) for her son Charming to marry Fiona, and on the basis of that deal, she gave him HIS “happily ever after” years ago. When the Fairy Godmother threatens to revoke the arrangement, the King agrees to find someone to kill Shrek so Charming can step in. Enter…Puss n’ Boots (Antonio Banderas in a brilliant casting choice), famed ogre killer extraordinaire. 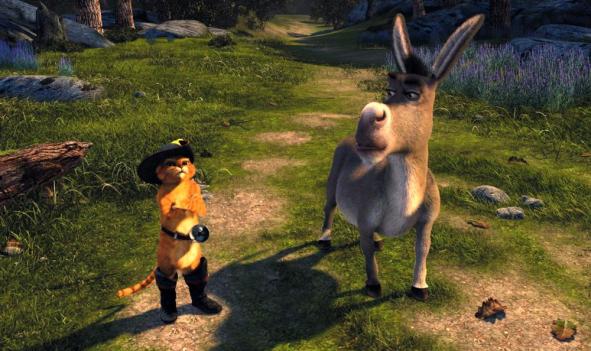 A big message in this film is the importance of accepting others for who they really are, and not trying to change them into your vision of “normal” or “happy.” Granted, Shrek and Fiona don’t match the happy couple everyone initially expects, but the King and Queen gradually come to understand that the two are deeply in love, especially after the lengths Shrek goes to in winning Fiona back (there’s a hilarious sequence where Shrek takes a potion, becomes human, which makes Fiona human again, only Charming is pretending to be human Shrek, it’s a long story, but you should watch it!)

Jennifer Saunders (voicing the Fairy Godmother) steals every scene she’s in. This is NOTHING like the Fairy Godmother from Cinderella, while she pretends to be this sugary, lovey figure who only wants to grant wishes, the Godmother is really a nasty person, who’s really out for herself and her spoiled rotten son Charming (she made the deal with the King in order to see her son Charming eventually take the throne, so that presumably she could influence the Kingdom in her son’s name). It’s a shame she only appears in this film, she’d have made a great recurring villain.

The pop music scenes are awesome as well, including this great scene at the climax of the film where the Fairy Godmother sings “I Need a Hero” while human Shrek storms the castle with a giant Gingerbread Man.

Don’t get me wrong, the original film is a great movie, but I almost enjoy this sequel more because it really fleshes out the world that Shrek takes place in.

Julie Andrews is perfect as the Queen, that is all.

The reveal of the King as the “Frog Prince” was brilliant.

I’m still weirded out about Donkey and Dragon having kids because, I mean think about it, HOW did that work??? (also, while Donkey was a stallion, the producers stated that Dragon turned into a Pegasus).

Puss ‘n Boots might be one of the greatest characters this film series has ever produced, PERIOD. And nobody could do it like Antonio Banderas, absolutely nobody.

The numerous pop culture references in the Land of Far Far Away are too many to count, but they’re all well-done and it’s fun to watch the movie and try to catch all of them.

*film poster is the property of DreamWorks Pictures