Before we get to what makes this scene so disturbing, we need a little context first:

So as you might expect, Pinocchio is talked into taking a little trip to Pleasure Island (despite Jiminy’s best efforts to stop him). They join a carriage full to the brim of rowdy boys pulled by eight donkeys (remember that detail). It’s so crowded in fact, that Pinocchio is sitting up front by the Coachman with an older boy named Lampwick. They bond as kids tend to do when they’re traveling together and after a long ferry ride to Pleasure Island, the pair stick together once they get inside.

Pleasure Island looks like the world’s biggest amusement park. There’s the typical rides, a Ferris Wheel, and lots of deliciouis food to eat (pies, ice cream, popcorn, etc.) along with other attractions you wouldn’t normally find: a tent devoted to fistfighting, a model house that the boys are free to rip apart, even “Tobacco Row” where the boys can have all the cigars they want (remember, this is 1940). And above all the clamor is the repeated sound of voices saying “Help yourselves boys, it’s all FREE, everything is FREE!” Jiminy Cricket smells a rat from the start though, but he’s lost Pinocchio in the crowd, so there’s really nothing he can do at the moment. In all the chaos, nobody notices when the Coachman orders the gates to be shut, remarking ominously “give a boy enough rope, and he’ll make a jackass of himself before long.” It’s an odd comment, but it’s meaning becomes too clear in a few minutes:

After a short scene break, we see that Pleasure Island is now deserted. All the rides are dark, the place is a mess, but there’s no boys, anywhere! We know they haven’t gone home because even Jiminy is wondering where the boys are. Actually, the place isn’t entirely empty, Pinocchio and Lampwick are busy playing pool while drinking and smoking cigars, but we’ll get back to them in a moment. After Jiminy gets into an argument with the pair, finally telling them to go ahead and “make jackasses” of themselves, he heads to the gate to leave, but on the other side, he hears the sound of donkeys….a LOT of donkeys. 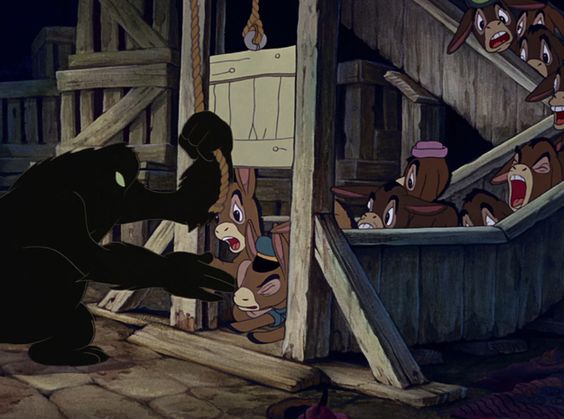 It’s horrifying to hear this little donkey cry “I want to go home to my mama!” When you know that’s NEVER going to happen!

Through a crack, Jiminy emerges to find the Coachman and his minions loading crate after crate of donkeys back onto the ferry used to take the boys to the island. What happens next is the first disturbing part of this scene:

As you see, the Coachman is screening the donkeys to see if they’re still capable of speech. If they bray in response, they’re stripped of their clothing and sent into an available crate (labeled for the salt mines and the circus, among other places). But in the case of others, like Alexander, who CAN still talk, they’re sent back to a waiting area, until presumably they lose their ability to speak. This is the moment that disturbs me and breaks my heart: when Alexander is thrown back, you can hear him and the others begging to go home, they don’t WANT to be donkeys, and then the Coachman snaps “QUIET!! You boys have had your fun, now PAY for it!” Remember earlier when the carnival promised the boys that “everything is free?” Of course it wasn’t free, that’s one of the first lessons we learn in life, but now these boys have to learn it the hard way.

Now back to Pinocchio and Lampwick (this is the REALLY disturbing part): Lampwick is still making fun of Jiminy, when suddenly his ears turn into donkey ears (to Pinocchio’s surprise).

The oblivious Lampwick continues to mock, and then a donkey tail sprouts out! 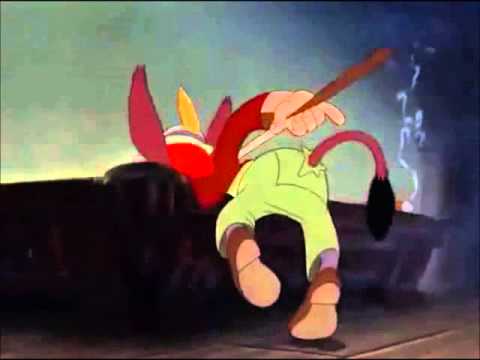 “What does he think I look like, a jackass?” Lampwick doesn’t realize it, but his face IS that of a donkey’s now.

Based on Lampwick’s reaction, I think he’d heard stories about Pleasure Island, but had never believed them (hence his cry “I’ve been double crossed (betrayed)”, I bet the Coachman assured him those stories were lies.)

Pinocchio laughingly tells him he does until his laugh changes into a donkey bray. Lampwick finds that funny until HE brays too. Then, Lampwick realizes that something is wrong with HIM! “What…what’s going on?” he asks desperately as he feels his changed face and discovers he has long donkey ears. And then…he sees his face in the mirror and screams “I’ve been double crossed!! Help! Help!! Somebody help!!” Lampwick is running through the pool hall desperately but there’s nothing anyone can do. Pinocchio can only watch in horror as the rest of Lampwick’s body begins to change (an especially horrifying part is when Lampwick’s hands, clawing at Pinocchio for ANY kind of help, turn into hooves before the puppet’s terrified eyes).

Lampwick’s final change is a disturbing moment, especially since you can hear him fighting against losing the power to speak as a human

And then, like a scene straight out of a horror movie, we see Lampwick’s final change in silhouette. With a final cry of “Mama, MAMA!!!” Lampwick is forced down to all fours and begins frantically braying, kicking and smashing everything in sight. It’s a horrifying fate for anyone to experience, but these are all young kids that are now condemned to a lifetime of cruel torture and servitude. There’s no happy ending for these boys, not even a glimmer of hope. And the same fate nearly comes to Pinocchio as well as HE begins to change also (though noticeably he’s changing into a GRAY donkey, everyone else turned brown.) Fortunately, Jiminy finds Pinocchio in time and the pair flee the cursed island quickly enough that Pinocchio only has donkey ears and a tail.

What a horrifying, disturbing fate for all those little boys. And just imagine all the families who are waiting for children that will never come home? The more you think about the situation, the more disturbing it becomes. And remember at the beginning when I pointed out the coach was drawn by donkeys? I have no doubt that the Coachman uses boys-turned-int0-donkeys to help carry more boys to Pleasure Island for the same fate. Oh the disturbing irony of it all. Without a doubt, THIS is one of the most disturbing moments in all of Disney animation, not just because of Lampwick’s terrified reaction to his transformation, but also because these hundreds of boys are left to their fate, with no hope of rescue.

Next time will be one more example from Pinocchio; see, even though he’s escaped Pleasure Island, Pinocchio isn’t out of danger yet. That’s because his father Geppetto has been swallowed by a whale…