I have this habit of developing crushes on villains. I’m not sure why, I think it’s because so many times the villain is the most interesting character in the story, he has layers to him, and interesting motivations. And then there’s a character like Loki, brought to brilliant life by Tom Hiddleston, who is another case entirely.

From the moment he first travelled through the Tesseract in The Avengers (my first experience with the character), I was in love with Loki of Asgard. The would-be King of Asgard/Midgard/whatever he can conquer is equal parts menace and charm. He’s also not afraid to get his hands dirty (unlike some villains) as he doesn’t hesitate to attack a man to get his eyeball (long story).

But please don’t get the idea that I have a crush on Loki because he does all of these evil things. What really attracts me to him is the fact that, for a villain, he really isn’t evil at all. In fact, the more I learn about Loki (as Tom Hiddleston has played him), the more sympathetic I am to his cause. 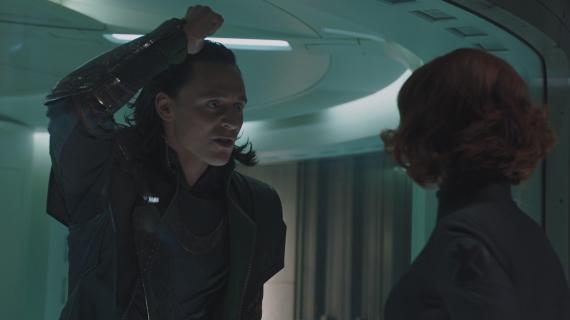 Take, for example, Hiddleston’s performance in the first Thor film. We (the audience) know from the start that Loki is actually a Frost Giant disguised as an Aesir. But Loki doesn’t know this until deep into the film, and once he knows the truth, you can tell it just DESTROYS him inside, to realize that he isn’t actually Odin’s son, that he actually belongs to a race that every last warrior in Asgard is raised from birth to despise.

And seeing Loki in such pain, I want to reach through the screen, comfort him and slap Odin upside the head for being such an idiot in favoring meathead Thor the way he does. It’s no wonder Loki has issues. And I know all about struggling through issues, so I am very much attracted to a man who suffers through similar things.

I hope this makes sense, why I have such a crush on Loki. He can be so charming, mischievous and it strikes me that he is the kind who does not give his affections (or trust) lightly. And at the same time, he is also not afraid to go after what he believes is rightfully his. He has his convictions (I don’t care what Coulson says), and I admire that in a man.

And that’s my crush on Loki 🙂 I hope you enjoyed it!