One of my favorite Disney animated films is the underrated The Great Mouse Detective (1986) which should be held in high esteem because it paved the way for the Disney Renaissance to begin with The Little Mermaid. The story features several memorable songs, my childhood favorite being “Let Me Be Good to You.” 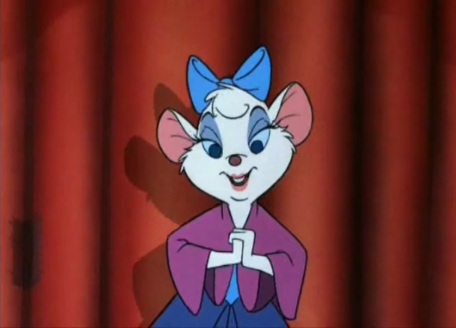 To recap: Basil and Dawson are searching for the hideout of the notorious Ratigan, who has taken little Olivia captive to ensure her father finishes a mysterious invention. Using his eccentric methods, Basil deduces that the entrance to Ratigan’s lair can be found at a seedy pub on the waterfront. Inside, a number of musicians are performing for the rowdy crowd with very little success, that is until a certain female mouse named Miss Kitty (Melissa Manchester) takes the stage.

“Let Me Be Good to You” starts off as a simple ballad with no hint as to what’s coming:

Dearest friends, dear gentlemen
Listen to my song
Life down here’s been hard for you
Life has made you strong
Let me lift the mood
With my attitude

Hey, fellas
The time is right
Get ready
Tonight’s the night
Boys, what you’re hopin’ for will come true
Let me be good to you

The audience is clearly moved, but things are just getting started! After disappearing behind the curtain, Miss Kitty returns to reveal a burlesque outfit (to the extreme delight of the audience) along with a pair of backup dancers. The song transitions to a big-band style number (the piano is completely drowned out by the brass) and features a long instrumental break while a drugged Dawson finds himself onstage dancing with the girls.

Hey, fellas
I’ll take off all my blues
Hey, fellas
There’s nothin’ I won’t do
Just for you

So dream on
And drink your beer
Get cozy
Your baby’s here
Hey boys, I’m talkin’ to you

The craziest thing about this song is it nearly got cut from the film on the grounds that it was too ‘adult’ to be in a children’s film (to which I say “Seriously? And the messed up things in The Black Cauldron, Pinocchio and Dumbo weren’t??”). They managed to keep the sequence in by arguing that since the characters in question were mice and not human, young viewers wouldn’t make the connection to anything inappropriate. And that’s true from my experience: it wasn’t until I was a lot older that I realized what I was really seeing in this scene.

The animation on Miss Kitty is really well done, especially when she’s wearing her ‘sexy’ outfit. It’s drawn in such a way that it looks revealing but it doesn’t really show anything inappropriate (although one should remember this film is set in the Victorian era and showing this much skin in public was considered scandalous in polite society).

In my opinion, over thirty years later, “Let Me Be Good to You” remains one of the best sequences of the pre-Disney Renaissance era and I hope you enjoyed reading about it. Let me know what you think about this song in the comments below and have a great day!