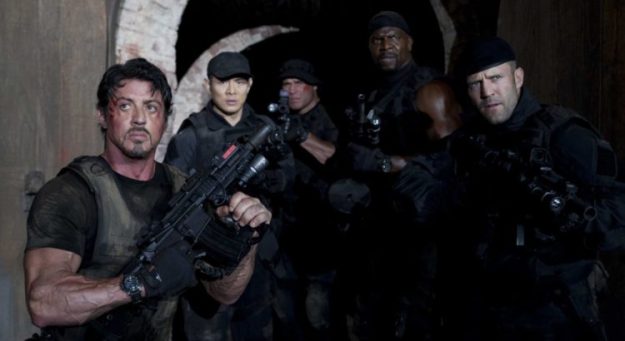 By all the rules of film as I understand them, The Expendables should not work. It’s a film filled with big action stars from the last 30 years who are slowly but surely getting past their prime and a story with actors like that just shouldn’t work! However, the action is so over the top that it does work and that’s why I freaking love The Expendables. It’s a story that follows Barney Ross (Sylvester Stallone) and his band of fellow mercenaries as they go on a job for Mr. Church (Bruce Willis). The regular band of Expendables consists of:

There’s also Mickey Rourke as Tool and Steve Austin (of WWE fame) as Dan Paine, one of the bad guys.

The plot of The Expendables, in a nutshell, is extremely basic. The band of mercenaries gets hired on a job that becomes very complicated and messy before all is said and done. In this case, Barry and the rest of our heroes are engaged to take out the dictator of a small island nation, only to find out that he’s being backed by a rogue CIA agent. It’s about as basic as a plot gets for an action film, but that’s alright because the insane levels of violence make up for any missing plot details. Seriously, this film (and the entire Expendables series) is an homage to the action flicks of the 80s. There are explosions everywhere, huge gunfights, and so much blood and death it’s kind of scary at times. And yet, despite that, as I said before, it just works. All the violence, all the gun fights, there’s something oddly cathartic about it all, that I can’t help but love.

It really is great to see so many action stars together in one place, that’s just part of what makes The Expendables so much fun, seeing all of those stars together and just watching them bounce off one another in all kinds of entertaining ways (I particularly love the dynamic between Jason Statham and Sylvester Stallone).

Let me know what you think about The Expendables in the comments below and have a great day!