Star Trek: The Motion Picture has had a bad reputation for years, and some of it is rightfully deserved. The pacing is way off (compared to the later films), the acting is…less than ideal at some points, and the mysterious V’Ger is so large as to border on the absurd (in the original version, the size was given as being larger than our own solar system (80 AUs, it was later dubbed over to 8, which is still very massive).

But one component of the film that I will defend to the death is Jerry Goldsmith’s score. Goldsmith introduced musical themes that have remained with the series (at least in the prime universe) ever since. One such theme is the “Klingon theme” that is heard at the beginning of the film when three Klingon ships move in to attack the mysterious cloud passing through their territory. (The theme begins around 0:09 seconds, listen for the brass)

This theme set the tone for the Klingons as they would now appear in the Star Trek film universe (this is also the first time we see “proper” Klingons with the distinctive ridges on their foreheads). Brass, horns and trumpets in particular, have long been associated with war and other martial endeavors (as that is where those instruments evolved) and by utilizing them, Goldsmith is reminding the listener that Klingons are a martial race, they always attack first, ask questions later. 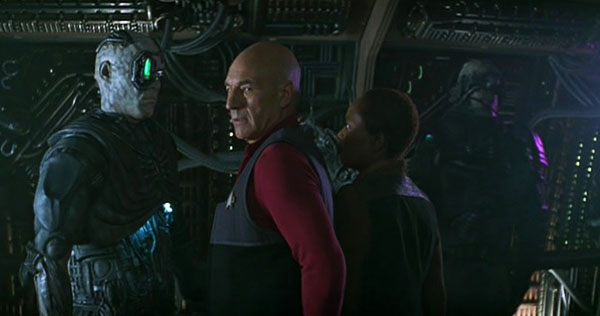 Fast forward almost twenty years to 1996 and the events of Star Trek: First Contact. The Federation’s ultimate nemesis, the Borg, are making another attempt to conquer and assimilate the human race, and all resources are being pulled together to stop this menace. In the midst of the battle, we come across the Defiant (the starship from Deep Space 9) commanded by everyone’s favorite Klingon, Worf (Michael Dorn joined Deep Space 9 after Next Generation went off the air). No sooner does Worf pop up, and the music heard is definitely the same Klingon theme played in The Motion Picture back in 1979 (considerably sped up, but the same theme regardless). The theme begins around 2:25.

I will always love how composers reuse musical themes from one film to the next (I also can’t believe it took me as many years as it did to catch this particular example).