The year was 1991. It had been two years since Disney successfully launched the Disney Renaissance with The Little Mermaid (1989), and now the time for their next animated classic had come: Beauty and the Beast (1991). The movie adapts the French fairy tale of a beautiful girl named Belle (which is French for “Beauty”) who slowly falls in love with a terrifying Beast, not knowing that he is actually a prince trapped in an enchantment. The score for this film was composed by Howard Ashman and Alan Menken. Ashman, suffering from AIDS, did not want to work on the film but was eventually persuaded to do so. His health took a turn for the worst during production and he died not long after work was completed on the film (though a few of his songs did appear in Aladdin.)

“Belle” is the opening number of the film and serves as our introduction to the book loving Belle, who is considered “a funny girl” by almost everyone in town. The exceptions to this are her father Maurice, the book-seller, and Gaston. The song begins with Belle walking into town, singing about how every day is the same (a fact that bores her immensely). As the townspeople sing “Bonjour!” (Good morning/Good day), Belle lists off all the familiar sights that she has memorized by heart. But Belle is dissatisfied and sings her refrain of “there must be more than this provincial life.” Having read all of these stories of adventure and romance, Belle dreams of finding her Prince Charming and being swept away to lands unknown.

Little town, it’s a quiet village
Every day like the one before
Little town, full of little people
Waking up to say

There goes the baker with his tray, like always
The same old bread and rolls to sell
Every morning just the same
Since the morning that we came
To this poor provincial town 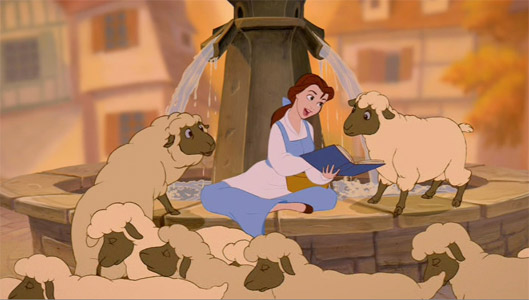 Now, before I continue, there’s something that should be pointed out. The Disney animators wanted to emphasize how Belle is different from everyone else in the village. To that end, they color-coded her outfit to stand out. Look at the scene of “Belle.” See the blue pinafore she’s wearing? No one else in town is wearing blue! Automatically Belle stands out to the eye (and it’s very effective). But I digress, back to the music…

Unfortunately (for Belle), there is a “Prince Charming” who is very interested in her, the town hero Gaston. When you first meet him, Gaston appears to be the stereotypical Disney hero: perfect good looks and a great singing voice (though this was by design to serve as a contrast to what comes later).

Right from the moment when I met her, saw her
I said she’s gorgeous and I fell
Here in town there’s only she
Who is as beautiful as me
So I’m making plans to woo and marry Belle

For all his gifts, Gaston is a narcissist, who thinks that he (Gaston) can do whatever he wants, whenever he wants, BECAUSE he is Gaston! This includes marrying Belle, “the most beautiful girl in town” because he “deserves the best” (the fact that Belle might not WANT to marry him doesn’t seem to make a difference). Gaston attempts to sing his own verse about how he fell in love with Belle at first sight, but it’s interspersed with lines praising his own handsomeness (you just know this “romance” is not going to end well).

As Belle prepares to leave town to head back home, the entire community begins to sing about her and this last verse sums up how much the town doesn’t “get” Belle:

Look there she goes, the girl is strange but special, a most peculiar mademoiselle/

Belle has always been my favorite Disney Princess ever since I first saw the film, because, like me, Belle is a bookworm, and she feels isolated because of this. Belle also dreams of adventure in far off places (and what young person doesn’t?) Interestingly, we never learn how old Belle is, or anything about her mother (we can presume she’s deceased, but when or how long ago is never broached). This is also one of my favorite Disney songs because, unlike Sleeping Beauty or Snow White, where the singer is a high soprano, Belle is a mezzo-soprano (which is my vocal range).

I admit, when I was younger (a lot younger) I used to wish that real life included people singing as they went about their daily lives, so sometimes I would pretend (as I was walking around) that people were singing the “Belle” song about me (ah, the power of imagination). That’s all for “Belle”, next time, as predicted, Gaston’s courting of Belle doesn’t exactly go as planned, and for that he’ll want revenge!!