For the first time in what feels like months (and I think it literally has been months) I got to go see a movie in theatres and the selection was Atomic Blonde!! I’ve been intrigued by this movie since I saw the first preview and it did not disappoint!

In brief, Atomic Blonde takes place in November 1989, a few days before the Berlin Wall came down (literally). The plot revolves around attempts to recapture “The List”, a piece of microfilm that contains the names of every field agent currently working in the Soviet Union (if it falls into the wrong hands numerous operations would be compromised). Top MI6 agent Lorraine Broughton (Charlize Theron) is brought in to retrieve The List and to assassinate an operative known only as Satchel. Satchel has been working as a double agent for the Soviets for years. Lorraine’s primary contact in Berlin is David Percival (James McAvoy), a fellow British agent who has gone more than a little mental in the years he’s worked in Berlin.

I loved McAvoy’s performance as Percival. From the moment we meet him, there’s an immediate suspicion that he could be Satchel, the double agent. Numerous hints are given to suggest that he is secretly undermining Lorraine and it is seemingly confirmed when Percival shoots a man (who memorized the List) that they are trying to smuggle out of East Berlin (he ultimately drowns when the car he and Lorraine are in crashes into a river).

And then there’s Charlize Theron in a complete badass role as Lorraine Broughton. She is intense from beginning to end and I loved every minute of it. I can see why people made comparisons between her character and John Wick (though even without the comparison I enjoyed the character).

You can tell that this story is adapted from a graphic novel (The Coldest City). I’m certain some of the scenes (like Lorraine emerging from a bathtub of ice) are taken straight from the pages of the story, and the fight scenes play out like they were taken straight from a comic story (they’re super-intense, with lots of high-intensity action and almost zero pauses).

The biggest thing I want to talk about is the twists that come at the end of the story (WARNING: MAJOR SPOILERS TO FOLLOW). So as I said, almost the entire film is spent building up our expectation that Percival is actually a double agent. Except when the climax comes, it’s turned around and revealed that LORRAINE is Satchel, she is the one who has been feeding intel to the Russians, she needed to kill Percival to cover her tracks. That was Twist #1. 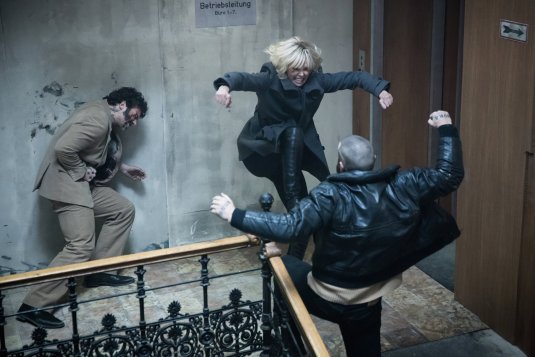 THEN, the story goes to Paris, where Lorraine (now speaking with a Russian accent), is meeting with a Soviet spy (who we met earlier in Berlin) who is revealed to be her handler. Having been informed of her “true” allegiances to the British, the Soviet leaves her to be disposed of by a professional hit squad (they even ask if she would be so kind as to step onto the tarp so her death will not make a mess in the hotel room). But Lorraine fights them off and before killing the Soviet spy, reveals that all the intelligence she’s given to the Soviets over the years has been FALSE. So she’s actually a fake double agent. That was Twist #2.

And the big kicker? The moment my jaw smacked the floor and my brain exploded? After being debriefed on all of this (the film bookends around Lorraine recounting all of this to MI6 and a CIA Agent) and agreeing that “none of this ever happened,” Lorraine heads to a private jet where she meets up with the CIA Agent. A montage reveals how she manipulated recordings and other evidence to show the British what they wanted to see and in actuality she’s American CIA (has been the entire time!!!). The CIA Agent who helped debrief her is waiting on the plane and she says (in an American accent) “Let’s go home.” And THAT Was Twist #3 (which came in the final sixty seconds of the film)! 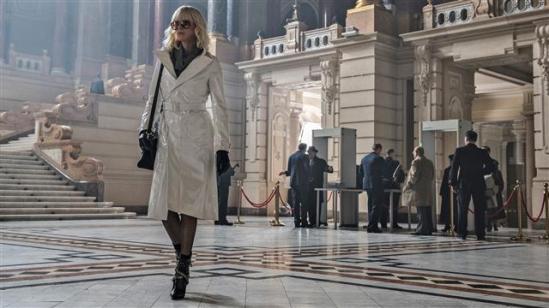 Those three twists led me to rethink EVERYTHING I had seen throughout the movie, because knowing that Lorraine is actually American CIA calls into question every motive and decision she made. And as the title of this post implies, I did NOT see any of these twists coming (which makes them the best kind of twists).

All in all, I liked Atomic Blonde. It was, as the saying goes, “a good popcorn film.” Sorry it took so long to get this review out, my life has been crazy for the last several months, but I’m glad you are sticking with me. Later!