At the end of “Gospel Truth I,” we’re taken into Mount Olympus where all the gods have gathered to celebrate the birth of Hercules to head god Zeus and his wife Hera (which is nothing like the actual Greek myth but this is Disney we’re talking about so I can live with it). On top of the amazing gifts the other gods have brought, Zeus creates an infant Pegasus out of a combination of clouds just for Hercules. The touching moment is soured however, when Hades, god of the Underworld (James Woods) makes an unexpected entrance.

Hades isn’t banned from Olympus per se, in fact Zeus goes so far as to invite the flame-haired god to join the celebration. The thing with Hades is…he’s very bitter over having to “work” as god of the Underworld while the rest of the gods get to lounge about all day on Mount Olympus. And because he’s so bitter, none of the other gods really like him (in fact they use one of Zeus’ jokes as an excuse to laugh him out of Mount Olympus). But if Hades has his way, they won’t be laughing for long, as the Muses return to narrate in “Gospel Truth II”

If there’s one God you don’t want to get steamed up
It’s Hades, ’cause he had an evil plan
He ran the Underworld
But thought the dead were dull and uncouth

Yes, Hades is Lord of the Underworld but he hates the job and he despises the unending stream of dead souls who flow into his domain. To that end, he’s working on a plan to free the Titans from their prison during a planetary alignment (in 18 years time) and use them as an army to eliminate Zeus and take power. He consults the three Fates to see if this will indeed occur and they assure him: in 18 years his plans will succeed HOWEVER., they caution: “should Hercules fight, you will fail.” 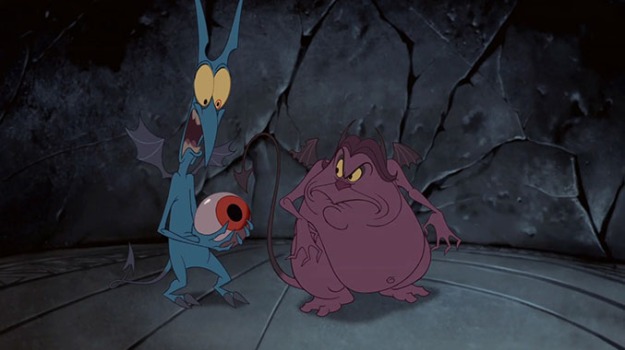 What the fates have done here is given a prophecy in the style of the famed oracle of Delphi which was famous for a number of reasons but one in particular that I wish to point out: the Oracle had a habit of phrasing it’s predictions in such a way that there was a hidden meaning in the statement. So the Fates have said that if Hercules fights (against Hades), then the plan will fail. To Hades, the solution is obvious: the infant god must be eliminated. However, if one looks deeper, there’s another route that Hades could have gone and it would have worked so much better.

Instead of eliminating the young god and inadvertently putting him on the path of becoming a hero when Pain and Panic bungle the job, Hades could have spent the next 18 years ingratiating himself to his young nephew and turning him against the rest of the gods (Hades is slick enough that you know he could’ve pulled it off) and when the time came, Hercules wouldn’t have fought against him. It’s an interesting what-if scenario but we all know Hades didn’t go this way.

Hades plan to eliminate Hercules by having him turned mortal and then killed halfway works: Pain and Panic (the traditional bumbling henchmen) do succeed in turning the infant god mortal. However, because he didn’t drink the last drop of a magic formula that made him mortal, the infant retains his immortal strength (but is otherwise like a normal baby). But because Hercules is now a mortal, even though Zeus and Hera know where he is, they can’t bring him home (why Zeus as king of the gods can’t just make his son a god again I’m really not sure). As the Muses narrate for the final time in “Gospel Truth III” :

This is the last we see and hear of the Muses until they narrate Hercules’ rise to fame in “Zero to Hero.” From this point on until then we get to follow Hercules as a teenager struggling to fit in with his abnormal strength. I like these segments of “Gospel Truth,” they move the action along and provide exposition without boring the audience. And the soul music style sets Hercules apart from other Disney films.

And those are my thoughts on “Gospel Truth II & III.” Let me know what you think about these two sequences in the comments below!

You can become a patron of the blog at: patreon.com/musicgamer460