I was inspired to watch Sicario after seeing the trailer for Sicario: Day of the Soldado (scheduled to be released on June 29th). I’d been warned by multiple friends and fellow bloggers that the film had some exceptionally violent moments in it, but I decided it was worth the risk to my psyche to see what this film was all about (it would also help me determine if the sequel was really worth seeing).

And my first thought after the credits rolled was “Oh yeah! That sequel is DEFINITELY worth seeing!”

I would be completely lying if I said parts of Sicario didn’t shock me to the core (I literally jumped at the beginning when that explosion happened and the “house of horrors” before that nearly did me in) but the story pulled me in deep enough that I needed to see where it was going despite my initial discomfort. 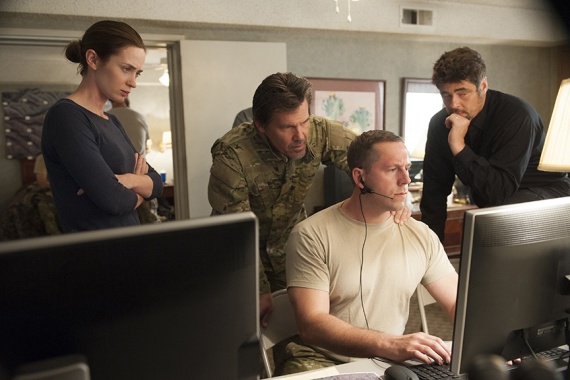 If you haven’t seen it, Sicario was directed by Denis Villeneuve (Blade Runner 2049, Arrival) and follows FBI agent Kate Macer (Emily Blunt) as she is suddenly sucked into the dark world of the Mexican drug cartels and the forces working to take them down by any means necessary. Her boss recommends her to a task force led by Matt Graver (Josh Brolin) and his partner Alejandro (Benicio del Toro). The assignment, she’s told, is to apprehend Manuel Diaz (Bernardo Saracino), a top lieutenant in the Sonora cartel. The truth, however, of what is really going on, is far more complicated.

An ongoing trope in Sicario is that things are not as they appear to be, there is something very dark and ugly at work and if you keep digging you’re going to find some very uncomfortable truths. Kate learns this the hardest way possible, even though she questions the assignment from the beginning, her desire for justice leads her along until she is in way over her head (and it nearly gets her killed several times). Kate is obviously the audience surrogate for this story (though she handles it way better than I would’ve).

My favorite character in the film is actually Alejandro Gillick, Graver’s “bird dog.” He doesn’t talk much, but once he’s introduced he’s a near-constant presence on the screen. And when he does talk, or really, when he does anything at all, it’s usually something of consequence to the story. Alejandro is initially presented as an assassin/enforcer type who is only doing this because he is ordered to/wants to. But it eventually comes out that everything he’s done for the last number of years is all part of his plan to get revenge on the cartel for murdering his wife and daughter. I think deep, deep down, Alejandro doesn’t like what he’s become, but now that his family is gone he doesn’t care anymore, he just wants revenge. Benicio del Toro blew me away with his performance and he is why I’m excited to watch the sequel this summer. Knowing that he lost a young daughter, it makes sense why (in the trailer) he’s so unwilling to kill this young girl (but I digress…). 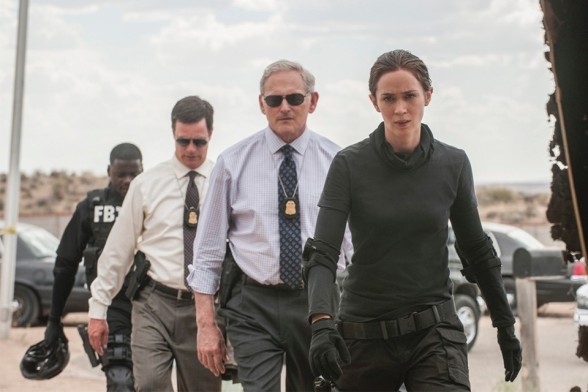 Besides the “house of horrors” at the beginning of the film (I’m talking dead bodies literally stuffed into the walls), there are some truly shocking moments throughout the film. For instance, when Kate is headed into Ciudad Juarez with the task force, there’s a shocking moment when we see several dismembered bodies hanging from a bridge. Then there’s a moment where a would-be love scene between Kate and a new acquaintance turns into an almost-murder scene in a matter of seconds (I admit I was not prepared for how vicious that scene got). The scene that bothered me the most though, was near the end when Alejandro confronted the boss of the cartel who was at dinner with his family. I knew he was going to kill them all, and I even understood why (they took his family, so he’ll take away this family to get even) but I still really didn’t like it. I mean after all, what did the kids do? They didn’t do anything, but then again that’s the point. In the world of Sicario, you don’t have to have done anything wrong to wind up dead. Simply being in the wrong place at the wrong time is reason enough.

Before I forget, there is one scene that bothered me and that’s what happened at the border crossing. As the team is escorting a prisoner into the United States from Mexico, they’re caught up in traffic just over the border and note several cars tailing them (armed to the teeth with guns). In short order, a lot of cartel members wind up dead surrounded by cars full of regular civilians, yet I never hear anyone reacting to what happened (no screams, no one else gets out, etc.) Yes I know the team is armed with military grade weapons, but shouldn’t someone have reacted to what happened besides Kate? Maybe I’m missing the point, but that part bothered me.

I did enjoy Sicario; it’s a thought provoking film about the lengths people are willing to go to get justice or control certain situations and what that does to certain people in the meantime. I mean, from a certain point of view, Matt Graver and his team are just as bad as the cartel (in terms of killing and violence). I can’t wait to see what happens to Alejandro in the sequel.

What did you think of Sicario? Let me know your thoughts in the comments below and have a great day!