H.G. Wells 1896 novel The Island of Dr. Moreau has been adapted to film multiple times in the course of film history, but the first was a pre-Code film entitled Island of Lost Souls (1932). When I say “pre-Code” I mean it was a film released before the Motion Picture Production Code (better known as the “Hays Code”) took effect. The Code, which regulated film content in the decades before modern film ratings existed, was in place from 1934 to 1968 and made sure films didn’t contain such unsavory details as scantily clad women or other such content they deemed “inappropriate” for film. Being pre-Code then, Island of Lost Souls contains a number of elements that wouldn’t reappear in cinema for several decades (more on those details later).

The film stars Charles Laughton as the infamous Dr. Moreau, a brilliant doctor and scientist with a keen interest in the evolution of life (both plant and animal). Richard Arlen plays Edward Parker, a shipwrecked traveler who ends up stranded on Moreau’s island; the famed Bela Lugosi is the Sayer of the Law and Kathleen Burke is Lota, the mysterious “panther woman.”

From the moment Parker arrives on the island (even before when he’s rescued by a ship headed to Moreau’s island), it’s clear there’s something strange going on. Moreau’s manservant M’ling (Tetsu Komai) has strange features, including fur tipped ears under his hair. On the island itself, the “natives” possess a variety of animal-like features. Though they wear clothes and walk on two legs, they seem barely human, despite Moreau’s assurances that nothing is amiss. Laughton’s performance as Moreau is spine-chilling: he presents himself as an amiable scientist, a man of culture, but the truth is he sees himself as a god, a being capable of terrifying things. Actually I see a great similarity between Laughton’s Moreau and Colin Clive’s Frankenstein (which only came out the year before this film). In that earlier film, after the Monster comes to life, Frankenstein proclaims “Oh God, now I know what it’s like to BE God!!” Really the only difference between the two is Frankenstein worked with deceased bodies to craft his monster, while Moreau worked on living animals. And while the latter’s look slightly more human, they’re no less monstrous.

Parker eventually stumbles onto the horrifying truth: these “men” of the island were made this way by Moreau. He’d started by forcibly evolving plant life into strange and exotic forms, but that hadn’t been enough. He’d begun to experiment on animals in London, relocating to the island when a dog got loose and revealed his work too soon. Moreau is obsessed with evolving animals into human form and develops a set of laws to keep them in line. As pronounced by the Sayer of the Law, the law is as follows:

“Not to spill blood, that is the Law. Are we not men?”

Originally, Parker was to be allowed to leave the next day, but after meeting Lota, a mysterious woman (the only one on the island and Moreau’s greatest creation), the doctor notes that Lota is responding to Parker the way a real woman would, so he conspires to keep Parker on the island to see if Lota is capable of doing everything a woman can, up to and including getting pregnant (never mind that Parker has a fiancee waiting for him). Lota is an interesting character: she looks completely human (and is presented as such by Moreau), but if you watch her carefully, you can see she still moves in an animal like manner in the way she holds her head and her body. They also used faint makeup around her eyes to give the impression of feline eyes. 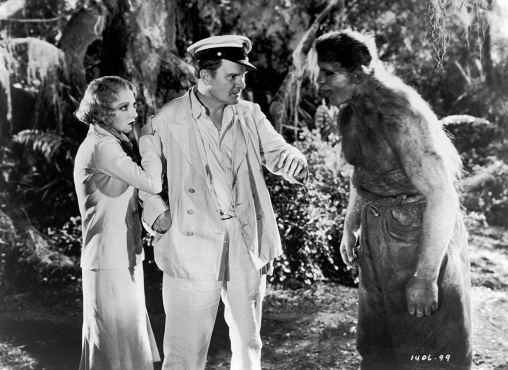 However, there’s a flaw in Moreau’s work: Lota begins to revert to her original form as claws replace her fingernails. Presumably, the other beast men of the island are also reverting, however slowly, for it partially explains what happens at the end of the film.

In the climax, Parker’s fiancee has gone looking for him and gets another captain to bring her to the island. Moreau doesn’t want his “guests” to leave, so he orders one of the beast men to kill the ship captain before he can bring more of his crew onto the island. The beast man does as he is asked, but now there’s a problem, a big problem. By ordering the beast man to kill and thus “spill blood,” one of the laws has been broken. When the Sayer of the Law confronts him about this, the beast man replies “He TOLD me to spill blood.” Moreau did his experiments a little too well and doesn’t realize his beast men have an ability (however basic) to reason things out. Thus, led by the Sayer of the Law, the beast men reason that: Moreau told one of them to spill blood, which breaks the law, which means there is NO law. Also, the Sayer confirms that Moreau is a man like the dead ship’s captain…which means Moreau, their creator and tormentor, can die as well. When this realization is reached, all hell breaks loose. Having lost all authority, Moreau is dragged to the experimentation room and torn apart by his own instruments while the island goes up in flames. Parker, his fiancee and Moreau’s assistant Montgomery get away, but Lota sacrifices her life to stop a beast man from pursuing them.

The film is a good example of early horror, the beast man makeups are particularly well done. Bela Lugosi is practically unrecognizable as the Sayer of the Law (in fact if I hadn’t known he was in this film I’d have never guessed it was him). If you’re a fan of H.G. Wells, I highly recommend this film to you.

If you’ve seen Island of Lost Souls what did you think of it? Let me know your thoughts in the comments below and have a great day!