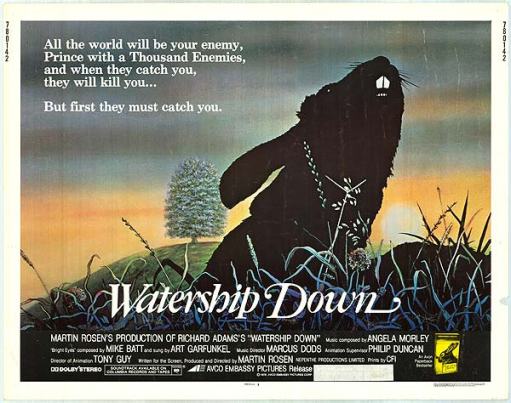 For a long time the only thing I knew about Watership Down was the book written by Richard Adams in 1972. I did my best to read my mom’s battered copy, but it was a very long story and I quickly lost interest. Fast forward a number of years and I was delighted to discover a movie version of the story existed! The film simplified the story considerably and it’s remained a favorite of mine for many years.

Watership Down, to put it simply, is a story about rabbits. Author Richard Adams created an entire rabbit language and culture and it’s so thoroughly put together that by the end of the story you kind of believe that these things about rabbits are really true, but I digress…in the story, we primarily follow a group of rabbits led by Hazel and his runt brother Fiver. The latter has this gift of seeing things before they happen, and one evening he has a vision that something terrible will happen to their warren. While most of the rabbits don’t believe a word Fiver says, Hazel believes his brother and convinces a small group to leave the warren and find a new home.

Finding a new home (the titular Watership Down as it becomes known in the book) takes up most of the story and it’s far from easy. The rabbits travel across the countryside, evading dogs, busy roads, a weird warren of rabbits led by Cowslip and most importantly, the overcrowded warren of Efrafa led by General Woundwort. The film, though animated, does not shy away from revealing how graphically dangerous the journey is. For example, one female rabbit is snatched by a hawk; Bigwig is nearly strangled to death in bloody fashion by a snare; and in Efrafa, we see numerous examples of how rabbits are punished for breaking the rules (getting scratched up and having their ears torn up). Watership Down is one of those films that on the outside looks like an ordinary children’s film but it really deals with some extremely adult topics (lucky for me I didn’t see the film until I was in my teens).

The story isn’t ALL dark, some wonderful comic relief is provided by the seagull Kehaar (Zero Mostel in his final role). The rabbits befriend him when they discover him by their new warren with a damaged wing. He helps them rescue a lot of rabbits from Efrafa in the climax of the story before returning to his “big water” (the ocean). 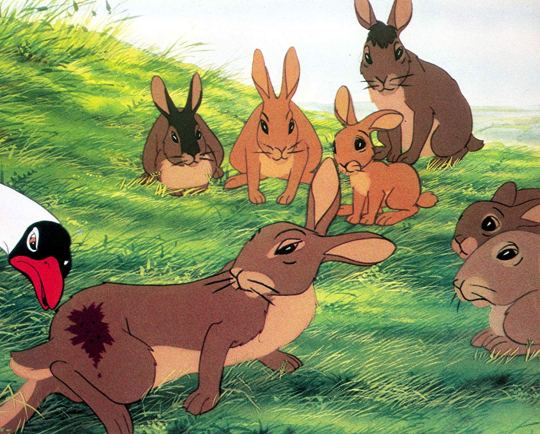 Another character I must talk about is the fearsome General Woundwort. He’s the biggest rabbit you’ll ever see (in fact the book implies he’s more hare than rabbit, and yes there is a difference). Woundwort rules Efrafa with an iron paw and won’t allow any rabbits to leave, despite legitimate complaints that there is simply no room for kittens (baby rabbits) to be born. When the Watership Down rabbits successfully rescue a large group of Efrafans, Woundwort goes on the warpath and leads his rabbit soldiers to take ‘his’ rabbits back. The depths of Woundwort’s madness can be seen in his final moments: Hazel has contrived to lead a dog to the down, knowing that it will hunt down or chase away all the Efrafans (his people are safely underground in the burrows where the dog can’t get to them). As the Efrafans run for their lives, Woundwort appears and shouts “Come back you fools, come back and fight, dogs aren’t dangerous!” Any rabbit with common sense would know that dogs are very dangerous and should be avoided at all costs. Not only does Woundwort claim this ISN’T the case but his last act is to charge straight at the dog! 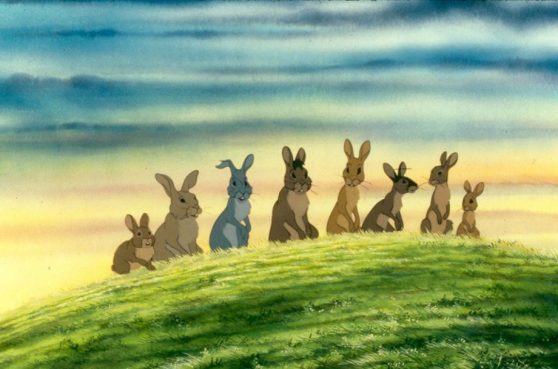 While I wouldn’t recommend showing this film to children under the age of 10, it is a good film to watch if you like stories about adventure with a touch of the supernatural thrown in for good measure. There’s a wonderful song, “Bright Eyes” sung by Art Garfunkel halfway through the story while Fiver searches for Hazel after an expedition to add female rabbits to the warren goes wrong. It’s a great interlude in the action.

All in all, Watership Down is a great film and one that everyone should see at least once. What did you think of Watership Down? Let me know your thoughts in the comments below and have a great day!