I’ve been a fan of the Muppets since before I can remember (for that matter, even before I knew what a Muppet was). Be it Sesame Street or The Muppet Show, if it had Muppets in it, I watched it. That’s why I was so excited to get the opportunity to watch the original Muppet movie,  The Muppet Movie, in theaters, the way everyone got to see it forty years ago when it originally came out.

The movie presents itself as something of an origin story for how Kermit and the other Muppets first met and ended up becoming rich and famous in Hollywood. What starts off as Kermit the Frog’s journey to audition for a movie studio, quickly balloons into a tale of  close-knit friends following their collective dream to become famous entertainers. Along the way, Kermit picks up Fozzie Bear, Gonzo (and his chicken), Miss Piggy (who instantly falls in love with Kermit), Dr. Teeth and the Electric Mayhem, Dr. Honeydew and Beeker, and Rowlf the Dog. Along the way, this growing cast of characters have to elude the obsessed Doc Hopper (Charles Durning), who’s determined to make Kermit his spokesman for a chain of frog legs-serving restaurants (Hopper fails to see why a frog wouldn’t be keen on promoting restaurants that serve frog legs). 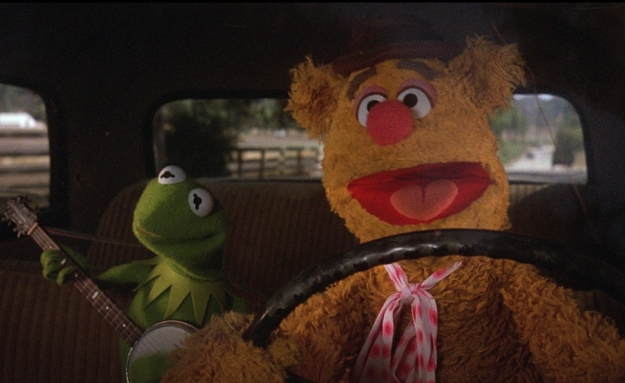 Along with the story, which is charming, fun, and never gets old, one of my favorite things about The Muppet Movie is the never-ending stream of celebrity cameos. Seriously, they’re everywhere, and you never know who is going to show up next. I can’t list them all, there are just too many, but some of my favorites include:

And then there’s the many great songs throughout the film, including “The Rainbow Connection”, “Movin’ Right Along”, and my personal favorite “I Hope That Something Better Comes Along”, just to name a few. To this day, I love singing along with each and every one of those songs.