As long as I live I will never forget the first time I saw Alien. I was in college, it was my sophomore year and I was feeling really bored and in the mood for something new. There was an Alien marathon on TV and I decided to just sit down and try them (since I’d never seen them before). And for the record, I did know about the chestburster scene going in, I just didn’t know where in the film it would be.

Alien, if you’ve never seen it before, is a dark, gritty piece of science fiction horror that is about as far from the sanitized utopia of Star Trek as you can get. The story follows the crew of the Nostromo, a commercial space tug hauling a massive shipment back to Earth. The ship is clean (for the most part) and functional, but it’s not what you’d call elegant. There are no sleek lines or holographic displays here; this is a ship that feels real. The crew is abruptly pulled from stasis when the ship’s computer “Mother” detects a transmission coming from LV-426, a barren moon. There they stumble across the wreckage of an alien spacecraft which is carrying a strange cargo of eggs…and the situation deteriorates from there.

The story is almost literally a case of “curiosity killed the crew.” Once Kane (John Hurt) is attacked by the alien face hugger, Ripley (Sigourney Weaver) is the only sensible one who wants to follow protocol and keep Kane in quarantine until they can determine if it’s dangerous. Ash (Ian Holm), the science officer, overrules Ripley and allows Kane to come on board, setting the events for the rest of the film into motion. The facehugger implants an egg, which quickly develops into the iconic alien (in gruesome fashion) and one by one the crew is picked off. If they hadn’t been so hellbent on investigating the alien ship in the first place, no one would have died (probably). Though given how ruthless the Company (later retconned to the Weyland-Yutani Corporation) is implied to be, if the crew had returned with nothing they probably would have met with some kind of “accident” back on Earth.

Part of what makes the first Alien film so terrifying is how little you really see of the alien itself. This was done by design as director Ridley Scott wanted audiences to see the alien as a terrifying figure and not just “some guy in a rubber suit” (which is exactly what the alien was, but watching the film you’d never know that). There is also no way of knowing when the alien is going to appear next. 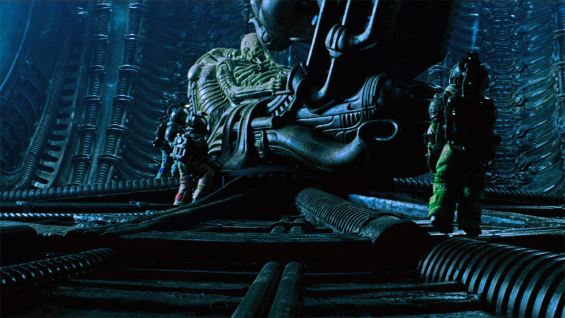 My two favorite examples involve the death of Captain Dallas (Tom Skerritt) and the climax of the film. In the first scene, Dallas is stalking the alien with a flamethrower…or at least he thinks he is. At an intersection of the ship, Dallas turns with a light and the last thing you see is a jump cut of the alien lunging out of the darkness (it always makes me jump too, even though I KNOW the shot is coming, the way it’s timed always puts me on edge). The second example is even scarier because it’s also a false ending: Ripley has escaped the Nostromo by the skin of her teeth and is preparing to enter a stasis pod until she can be rescued. Just as everyone’s relaxed…THERE’S THE ALIEN! It’s hand literally pops out of the wall as it had burrowed itself into the side of the shuttle to escape detection. Fun fact about this scene? If you examine the wall of the shuttle while Ripley is getting changed, you can just see him sitting there before the moment happens (but you have to look carefully, he’s camouflaged very well).

One scene that makes me intensely uncomfortable is the scene where Ash tries to murder Ripley. I know it was probably designed to make the audience squirm but that doesn’t make it any easier to sit through (in brief, Ash tries to suffocate Ripley by forcing a rolled up magazine down her throat), in fact many times I just skip the scene entirely.

And of course I have to mention Jerry Goldsmith’s fantastic score, which is minimal to be sure, but very effective. Actually, the opening credits were supposed to feature a theme that was more orchestral and Romantic in tone, but Ridley Scott didn’t like it so Goldsmith was obliged to recompose the opening to what you hear in the final cut (he would also grouse that while the first piece took weeks to compose, the piece that made it into the film took all of ten minutes to put together). Despite the difficulties, the score was nominated for a Golden Globe, a Grammy Award and a BAFTA Award (though unfortunately it didn’t win).

Alien is one of those rare films that you can watch over and over and still be scared every single time; it’s definitely one of those films you must see at least once in your life. If you have seen Alien, let me know what you think about it in the comments below and have a great day!