After a treacherous sea voyage, John Smith and company have arrived on the shores of the New World (what is now part of the state of Virginia). Governor Ratcliffe dispatches Smith to scout the terrain and see if any Indians are about the area. Meanwhile, the rest of the settlers are going to start digging, wait…digging??

The gold of Cortes
The jewels of Pizarro
Will seem like mere trinkets
By this time tomorrow
The gold we find here
Will dwarf them by far
Oh, with all ya got in ya, boys
Dig up Virginia, boys

Mine, boys, mine ev’ry mountain
And dig, boys, dig ’til ya drop
Grab a pick, boys
Quick, boys
Shove in a shovel
Uncover those lovely
Pebbles that sparkle and shine
It’s gold and it’s mine, mine, mine

Yes, that’s right. Ratcliffe (the greedy lout) is convinced that Virginia, like the Spanish New World (Mexico) is full of gold and precious gems. Barely scratch the surface and they’ll all be rich as kings! Of course, Ratcliffe (David Ogden Stiers) has no intention of sharing any of this wealth; his plan (revealed in the following song) is to return to England filthy rich and be ennobled by King James, and then become the envy of the entire court. 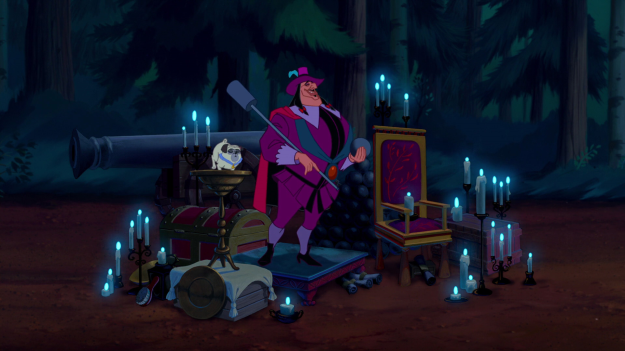 My rivals back home
It’s not that I’m bitter
But think how they’ll squirm
When they see how I glitter!
The ladies at court
Will be all a-twitter
The king will reward me
He’ll knight me… no, lord me!

It’s mine, mine, mine
For the taking
It’s mine, boys
Mine me that gold!
With those nuggets dug…

It’s glory they’ll gimme
My dear friend, King Jimmy
Will probably build me a shrine
When all of the gold… is mine!

All of this is the basis for the song “Mine, Mine, Mine!” Ratcliffe draws a beautiful picture of the treasures that could be discovered, convincing the settlers to begin a digging and mining operation on a grand scale; leveling trees and digging deep pits in search of treasures that actually don’t exist (in real life, the natives of this area primarily had metal decorations made of copper). Ratcliffe is unwittingly sending the settler’s on a fool’s errand by having them dig up the land for something they’ll never find. The song (for the most part) perfectly highlights how greedy and selfish Ratcliffe really is.

Meanwhile, John Smith is out exploring the pristine countryside (while a curious Pocahontas follows at a distance). He’s a man of adventure, and he believes he’s finally found the perfect land to explore. Smith isn’t really interested in gold or treasure of any kind, he’s in this for the glory of the adventure. This leads to the rival statements of “mine”: Smith says, “the greatest adventure is mine” while Ratcliffe boasts “all of the gold is mine!”

All of my life, I have searched for a land
Like this one
A wilder, more challenging country
I couldn’t design
Hundreds of dangers await
And I don’t plan to miss one
In a land I can claim
A land I can tame
The greatest adventure is mine!

Two adventures have been started now: John Smith is out exploring (and soon to meet Pocahontas) while Ratcliffe supervises the settlers with their endless digging. So here begins my return to regular posts on Disney film music, I hope everyone had a good Thanksgiving 🙂 This post was relatively short but I think they’ll get longer as I get more comfortable writing again

Become a patron of the blog at patreon.com/musicgamer460

Pocahontas “Just Around the Riverbend” (1995)