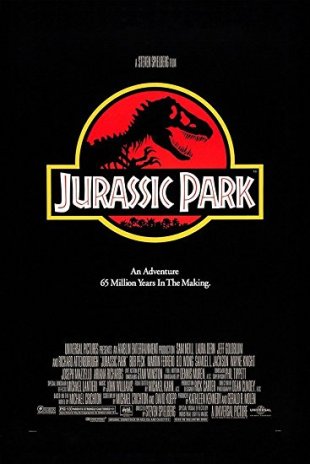 Given my well-known aversion to scary films, it often surprises my friends when they find out I enjoy watching Jurassic Park. While it’s true that this film has its own fair share of insanely terrifying moments (including one in particular that still scares me quite a bit), my lifelong love of dinosaurs as well as my appreciation of Spielberg’s storytelling abilities overrides my fear (John William’s excellent score helps as well). I dimly remember seeing advertisements for this film on TV and being super excited that there was a “dinosaur movie” being made.

And given I was all of 5 years old when the film came out, I couldn’t understand why my parents wouldn’t let me see the movie with the dinosaurs in it (dinosaurs were my first obsession, I couldn’t read enough about them). Of course now I understand that they kept me far away from this film because it was full of scenes that were not appropriate for a 5 year old kid, but unfortunately for my psyche, I didn’t know that when I was 9 and finally managed to see the movie for the first time at my best friend’s house. 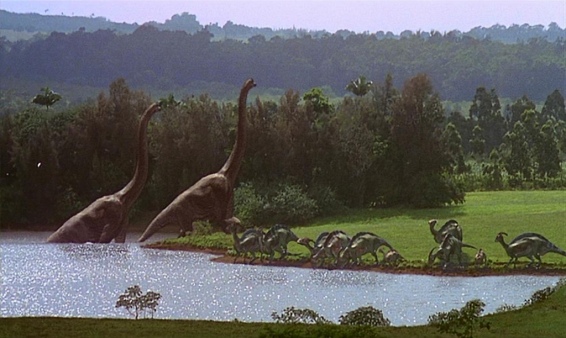 If you haven’t seen the film, Jurassic Park is adapted from Michael Crichton’s 1990 novel of the same name and follows the development of a theme park being built on (fictional) Isla Nublar off Costa Rica that is filled with genetically engineered dinosaurs resurrected from ancient DNA samples. After a deadly accident, the park’s creator John Hammond (Richard Attenborough) needs a group of experts to sign off on the park before the investors will fully commit to opening the island to the public. To that end, the following group is invited to the island to tour the facility:

This group is also joined by Lex and Tim Murphy (Ariana Richards and Joseph Mazzello respectively), Hammond’s grandchildren. Tim is obsessed with dinosaurs (and is a big fan of Dr. Grant’s work), while Lex is a tomboy and a would-be computer hacker. 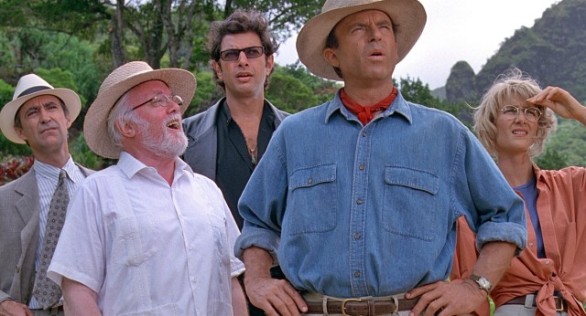 This first part of the film shows the dinosaurs in all of their positive glory: we see a giant herd of dinosaurs gathered around a lake, feeding from the trees, even a triceratops (albeit one that’s in pain). But things start to become menacing almost straight away: we see the velociraptor enclosure and how they have to be fed by lowering whole (Live!!) cows into a brush-filled space, the only sign of their presence being the rustling of the branches. And then there’s the threat of a hurricane moving onto the island that threatens to cut the tour of the park short and oh yes, there’s also the sub-plot of programmer Dennis Nedry (Wayne Knight) plotting to steal various DNA samples for a rival company.

One part of this film I like is how Hammond and most of his staff are in complete denial of how completely in-over-their-heads they are in regards to the dinosaurs they’ve created. The more you hear them talk, the more you just know something is going to go terribly wrong and does it ever! Due to a series of events, the power is cut to the electric fences surrounding each enclosure and the T-Rex is among the first to get out (and did I mention the group touring the park is right in front of that area??) 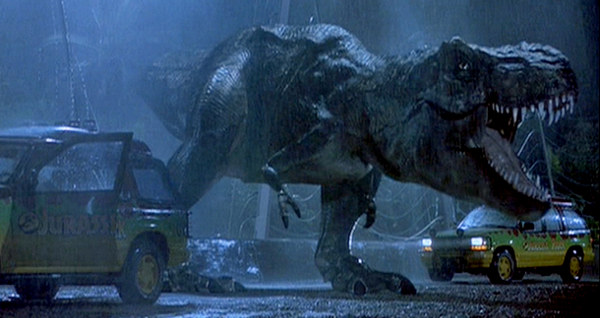 The T-Rex is a masterpiece of early-90s CGI that has held up surprisingly well over the last 25 years. Originally, the dinosaurs were going to be realized with traditional stop-motion animation until a computer test demonstrated that the dinosaurs could be almost fully created with CGI. But what really puts the T-Rex over the top is the real-life component of the creature. For the epic sequence where the dinosaur stalks the human characters, a full-size animatronic head, arm and two feet were created. Shots of these components were interspersed with the CGI creation to create a spine-tingling moment.

But as scary as the T-Rex scene is, it’s nothing compared to the kitchen scene. You know the one I’m talking about: it’s late in the story, most of the surviving characters have made their way back to the main park building…but so have the velociraptors, who begin stalking Tim and Lex as they run and hide in the kitchen. This sequence terrified me as a kid because I was about the same age as Tim and Lex (give or take a few years) so I could completely identify with them as they hid from the velociraptors. Like the earlier T-Rex scene, the footage of the raptors is a combination of animatronics, live-action puppets (with human performers) and CGI. In fact, there were so many wires required to make the puppet and animatronic components work, that Tim and Lex had to repeatedly jump over them to keep from tripping on them (it’s a wonder they filmed that scene without any of that becoming visible). This scene is so well done that, even though I know it’s all part of a movie and no one is in any actual danger, I still feel terrified that the raptors are going to find and eat the kids!

And then there’s John William’s beautiful score for this film. When you run through a list of Williams’ most recognized pieces, the main theme form Jurassic Park is almost always included and rightfully so. It was the composer’s intention to create music that embodied the sense of awe a person would feel if they really did see dinosaurs walking in front of them as the characters in the film do and the score definitely succeeds with this.

And now for some random thoughts and trivia:

And those are my thoughts on Jurassic Park! I still like watching it from time to time when I want to have a day to myself (usually during a weekend). What do you think of Jurassic Park? Let me know your thoughts in the comments below!