Given how much I was looking forward to Steven Universe: the Movie, part of me finds it really funny that I completely forgot the movie was getting a DVD release until I stumbled across a copy at the store. Of course as soon as I saw it my first thought was “I need to get this!” because, due to having no cable, I actually hadn’t seen the movie yet. And trust me when I say, buying the film on the fly was totally worth it.

As beautiful as the movie is, Steven Universe: the Movie is also another reminder that the story of Steven Universe is slowly winding down to a close. After five seasons of fighting evil and saving the world, Steven has grown into a 16 year-old who bears only a passing resemblance to how he looked for most of the series. Also? Steven’s voice is much, much deeper, and that took some getting used to for me.

Speaking of changes, this movie is all about change and how necessary it is, even if it’s completely unwelcome. The movie opens with Steven and the Crystal Gems completely content with the life they’ve built on Earth after the events of season 5 (which I won’t mention because I don’t dare spoil it). However, since this IS Steven Universe, it doesn’t last long, and once again Steven is forced to deal with something that Pink Diamond did in the past. This part of the story is actually really sad, and I’m having a really hard time liking Pink Diamond right now due to what she did.

Spinel, the villain for most of the story, is one of the most tragic characters I’ve seen in all of Steven Universe. She was only doing the job she was created for, and then….THAT happened to her. It’s no wonder she’s angry, she has a right to be angry. And what she does to Steven and the Crystal Gems is not only cruel, it’s proof positive that we should never take the way things are for granted, because it change, permanently, at a moment’s notice. 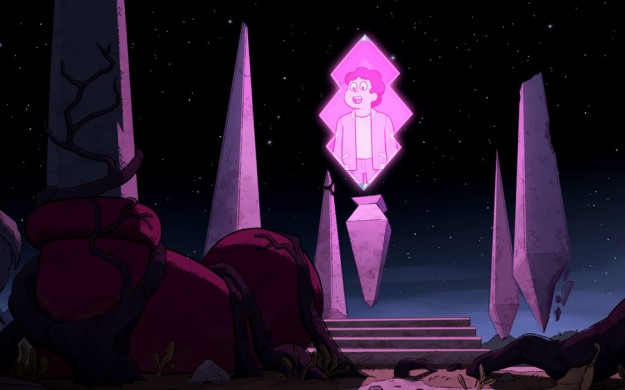 As with everything in Steven Universe, the movie is filled with songs that are memorable and catchy, just what you’d expect from Rebecca Sugar. I highly recommend checking out the soundtrack if you get the chance. There are songs everywhere, in fact, I almost feel like there are too many songs, because at times there’s one song, a beat, and then a second song begins. That doesn’t really bother me per se, but it might bother some.

Steven Universe: the Movie is a really fun movie. There are twists, highs and lows, and one surprise in particular had me gasping in surprise. And in the end, I felt extremely satisfied as the credits rolled. I’m still not ready to say goodbye to Steven Universe, but at least there’s still a little bit of story left to tell in Steven Universe Future.

Let me know what you think about Steven Universe: the Movie in the comments below and have a great day!

Admitting I was wrong about Steven Universe (2013-present)