Given how much I was looking forward to Steven Universe: the Movie, part of me finds it really funny that I completely forgot the movie was getting a DVD release until I stumbled across a copy at the store. Of course as soon as I saw it my first thought was “I need to get this!” because, due to having no cable, I actually hadn’t seen the movie yet. And trust me when I say, buying the film on the fly was totally worth it.

As beautiful as the movie is, Steven Universe: the Movie is also another reminder that the story of Steven Universe is slowly winding down to a close. After five seasons of fighting evil and saving the world, Steven has grown into a 16 year-old who bears only a passing resemblance to how he looked for most of the series. Also? Steven’s voice is much, much deeper, and that took some getting used to for me. 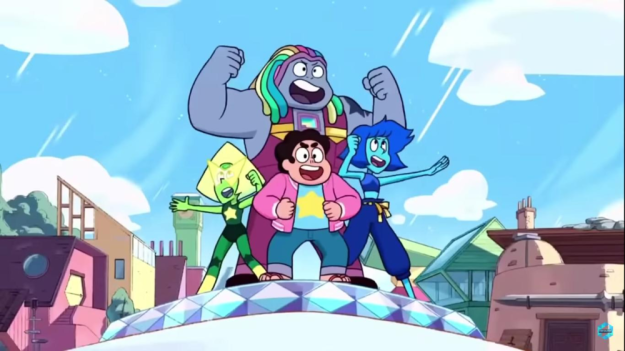 Speaking of changes, this movie is all about change and how necessary it is, even if it’s completely unwelcome. The movie opens with Steven and the Crystal Gems completely content with the life they’ve built on Earth after the events of season 5 (which I won’t mention because I don’t dare spoil it). However, since this IS Steven Universe, it doesn’t last long, and once again Steven is forced to deal with something that Pink Diamond did in the past. This part of the story is actually really sad, and I’m having a really hard time liking Pink Diamond right now due to what she did.

Spinel, the villain for most of the story, is one of the most tragic characters I’ve seen in all of Steven Universe. She was only doing the job she was created for, and then….THAT happened to her. It’s no wonder she’s angry, she has a right to be angry. And what she does to Steven and the Crystal Gems is not only cruel, it’s proof positive that we should never take the way things are for granted, because it change, permanently, at a moment’s notice.

As with everything in Steven Universe, the movie is filled with songs that are memorable and catchy, just what you’d expect from Rebecca Sugar. I highly recommend checking out the soundtrack if you get the chance. There are songs everywhere, in fact, I almost feel like there are too many songs, because at times there’s one song, a beat, and then a second song begins. That doesn’t really bother me per se, but it might bother some.

Steven Universe: the Movie is a really fun movie. There are twists, highs and lows, and one surprise in particular had me gasping in surprise. And in the end, I felt extremely satisfied as the credits rolled. I’m still not ready to say goodbye to Steven Universe, but at least there’s still a little bit of story left to tell in Steven Universe Future.

Let me know what you think about Steven Universe: the Movie in the comments below and have a great day!

Admitting I was wrong about Steven Universe (2013-present)

Two notes here: 1) I know I said this would be weekly, but I couldn’t hold back my thoughts on this series any longer and 2) Yes, Steven Universe is television and not film, but it’s really good regardless!!!!

The first thing I need to say about Steven Universe is: I was wrong. I completely misjudged this show, so much in fact that I sometimes feel really bad about it.

Backstory: In the last post, I said that I’m really picky about which movies I watch; this is DOUBLY true for cartoons. When you’re raised on Golden Age cartoons like Looney Tunes and Tom and Jerry (not to mention the renaissance of the 90s), the bar is set really, REALLY high. In the last five years or so, I’d noticed Cartoon Network churning out a lot of what I liked to call “dumb-stupid cartoons.” These are series that have minimal plot but a LOT of really bad/raunchy jokes (I won’t name any names, but if you look at a listing of recent shows, they kind of stand out). And when Steven Universe was announced, I instantly pegged it as one of those cartoons. So I ignored it.

Fast forward to the end of 2015: all of my comic book friends began raving about Steven Universe, and when I let it slip that I hadn’t seen the show, they all begged me to check it out. I resisted for most of 2016, until last month, I finally gave in and checked it out (the first two seasons are on Hulu). It took three episodes but I.Was.Hooked. 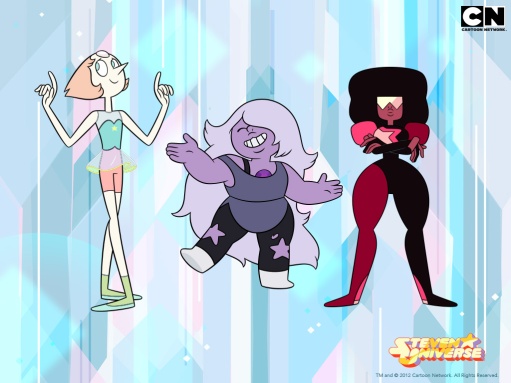 From left to right: Pearl, Amethyst and Garnet

Despite the name of the show, this series isn’t dumb at all! Quite the opposite actually, the backstory is increasingly complex and the show deals with some pretty serious issues at times (racism, war, bullying, etc.) while also spreading positive messages about making friends, cooperation, overcoming hatred, and so on.

Here is the gist of Steven Universe: The Earth is protected by a trio of heroes called the Crystal Gems, Amethyst, Garnet and Pearl. They are aliens from the Gem Homeworld that fought against their own kind over 1000 years ago (under their leader Rose Quartz) to keep the Earth safe. About 10 years before the show starts, Rose (in love with a human named Greg Universe) surrendered her physical form to make her son, Steven. Steven is a Gem/human hybrid who has his mother’s Gem where his belly button should be. As the show goes on, Steven learns to harness his powers while facing a growing threat from the Gem Homeworld (which is still seeking to conquer the Earth for its resources). Along the way Steven has made friends with additional gems including Peridot (whom I LOVE!!!) and Lapis Lazuli, both gems that originally come from Homeworld.

Lapis Lazuli is blue, Peridot is the green short one and that’s Steven on the end

A really cool part of the show is fusion, where two Gems can fuse together to create a totally new Gem! For example, Garnet (SPOILER ALERT!!!!!) is actually a fusion of Ruby and Sapphire, they just prefer staying fused together, though they will separate occasionally from time to time for various reasons. Pearl and Amethyst can form Opal, Pearl and Garnet can form Sardonyx, all three of them can form Alexandrite and just recently, I discovered that Steven and Amethyst can fuse to form Smoky Quartz (there’s more but I don’t want to give ALL the fusions away).

I’m nearly caught up with the series now and I still can’t get over how wrong I was about this show. The one thing I wish was different is the episode lengths. Each episode is 11-12 minutes in length, which isn’t that long at all. I wish the episodes could be longer!

It looks like eventually we’re going to be seeing the Gem Homeworld and (hopefully) meet the mysterious Diamonds who run everything (they’re called White Diamond, Yellow Diamond and Blue Diamond, but except for a few mentions and a sort-of flashback to Yellow Diamond, we haven’t actually SEEN any of them. There used to be Pink Diamond too, until Rose Quartz shattered her, it’s kind of a long story).

In closing, I’m really glad I gave this show a chance; it just goes to show you shouldn’t (with some exceptions) judge a show on its name only. If you haven’t seen Steven Universe, please go check it out!!