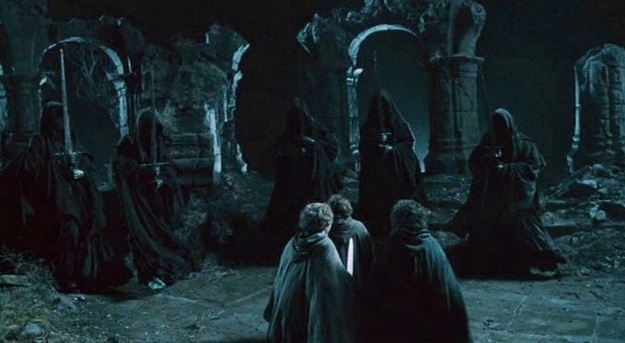 After Strider brings the four Hobbits to the former watchtower of Amon Sul (also known as Weathertop in the book), he gives all of them swords and then (predictably), leaves to have a look around. What happens next never fails to boggle my mind.

Keep in mind that everyone is aware that the Black Riders are hot on their trail and they do NOT want to be discovered by them. Why then, would they think it was a good idea to make an open campfire that could be seen for miles away? Frodo, jolting awake, discovers the fire and stamps it out, but it’s too late, the Riders have discovered them and converge on Weathertop.

It’s only now that the music really gets going. As the Hobbits run into the ruined watchtower, swords drawn, the strings take a spin-chilling leap into the upper register. I like to think that if the sensation of the hair on the back of your neck standing up was translated into sound, it would sound exactly like that. I also call this “Creepy-crawly music.”

Of course Frodo is the first to see the Black Riders appearing out of the darkness (in a moment that I absolutely love). The way they move in near unison, levelling their swords at the hobbits, it’s just scary! And the music does everything it can to heighten the tension, reinforcing that these Black Riders are really bad news.

The hobbits don’t stand a chance of course: Sam is blown away, Merry and Pippin are quickly knocked aside, leaving Frodo face to face with the leader of the Black Riders (a figure later named as the Witch King of Angmar). He knows that Frodo has the Ring, and he’s determined to get it. Terrified, Frodo slips the ring on and discovers what the Riders really look like. Instead of faceless black figures, the Riders are transformed into white, ghostly wraiths, skeletal shadows of the men they once were.

All wear crowns on their head, and the leader looks almost handsome (in a ghostly way). I imagine that in life the Witch King had a silver tongue and knew how to be persuasive. I say that because at first he tries to coax/coerce Frodo into giving him the Ring, using all of his will to draw the ring within a finger’s length of his hand. But Frodo’s strength is greater than he realized and when Frodo is able to draw his hand back, the enraged Witch King takes the more direct approach: he stabs Frodo in the shoulder with his dagger.

But before the Witch King can finish the job, here comes Strider!! And he’s come prepared for battle, not only does he have his sword, but also a flaming torch (the Black Riders aren’t fond of fire). Strider single-handedly wipes out (or scares off) the Riders, using his torch to set one on fire, out-dueling another and ending the fight by throwing the torch straight into the head of the last remaining Rider. The danger is gone, for now anyways, but there’s a big problem: the Morgul Blade has critically wounded Frodo. The only way to save him now is to get him to Rivendell as fast as possible. The chase is on!

“A Knife in the Dark” is not one of the biggest musical cues in The Fellowship of the Ring (it’s certainly not as memorable as, say, “The Shire”), but it fulfills its purpose in making the scene on Weathertop as terrifying as possible.

That’s all from Middle Earth!

For more Lord of the Rings, see also:

The Fellowship of the Ring “The Treason of Isengard” (2001)

The Fellowship of the Ring “The Bridge of Khazad-Dum” (2001)

*all images are the property of New Line Cinema

Leave a Reply to Martin: Through the Silver Screen Cancel reply