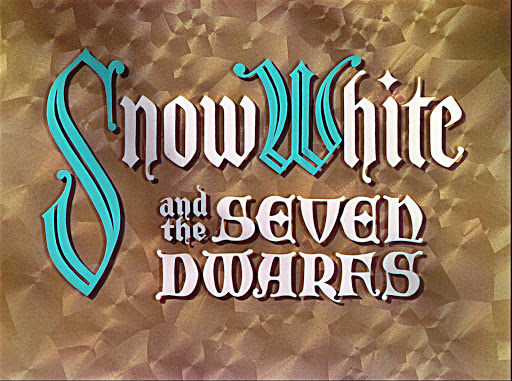 It’s hard to imagine, but there was a time when Disney did not completely rule the world of animation and children’s movies. Back in the 1930s, Disney was seen as a small studio that created funny cartoons, but little else. Of course Walt Disney had bigger plans, including an idea for making a full-length film that was completely animated (something unheard of at the time). What was once known as “Disney’s Folly” became known to history as Snow White and the Seven Dwarfs.

Released in 1937, the titular character is voiced by the singer Adriana Caselotti. She sings several songs over the course of the film, the first of which is “I’m Wishing,” sung to her bird friends as she gets water from the well in the castle courtyard. The melody is relatively simplistic, with many leaps from the tonic to the dominant (D to A) and back again. Before the melody returns for a final reprise (just before the Prince interjects), there is a lovely interlude where Caselotti shows off her vocal prowess and sings a call and response with her “echo” in the well. 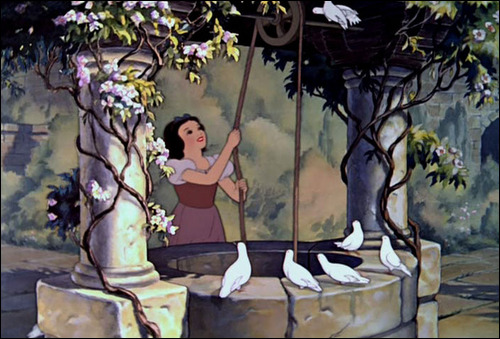 The song serves as a good introduction for the character: she’s a young (at least teenage) girl who’s clearly done her best to be happy, but still dreams of finding true love (and probably getting away from her stepmother the Queen). The music for this song (and most of the others) was composed by Frank Churchill, who’s last work would prove to be the score for Bambi in 1942.

You wanna hear a secret?
Promise not to tell?
(sung)
We are standing by a wishing well
Make a wish into the well
That’s all you have to do
And if you hear it echoing
Your wish will soon come true

It’s amazing how lifelike Snow White looks (and remember this was 1937, before computers, all of this was done BY HAND). By the way, look at the Prince below, doesn’t he remind you just a little of Prince Philip from Sleeping Beauty? This charming song is immediately followed by “One Song” sung by the unnamed Prince (his role was supposed to be larger but Disney wasn’t entirely convinced that his animators could bring a male character to life convincingly so this is the first and last time we see him until the end of the movie, where he again sings “One Song”).

Like “I’m Wishing,” “One Song” is a simple melody, well-suited for a tenor’s voice, that clearly sets out what the Prince is saying (i.e. I’ve fallen in love with you at first sight). The melody is again very simple, with a medium range of notes. Disney songs have a tendency to be very simple melodically (the idea was that this made them more appealing to children).

One heart
Tenderly beating
Ever entreating
Constant and true

One love
That has possessed me
One love
Thrilling me through

The only question I have is, if the Prince really loves Snow White that much, why didn’t he just take her away right then and there? Where did he go after this song ends? Nevertheless, it is a sweet moment (and the look on the Queen’s face when she sees the Prince wooing her stepdaughter is priceless!) Originally, there was going to be an idea that the Prince was supposed to be coming to court the Queen, which would also explain her outrage at seeing him woo Snow White, but the idea was ultimately dropped.

What do you think of “I’m Wishing” and “One Song”? Let me know your thoughts in the comments below and have a great day! This is going to be the start of me re-formatting my earliest blog posts. When I first started, I wasn’t sure what the blog would look like, so I experimented with some different formats. Now I’m going to fix my early work to match what I do now. Hope you enjoy!

Snow White and the Seven Dwarfs “Whistle While You Work” (1937)