Like many sixteen year old girls, Aurora wants very much to be in love, in fact she claims to have met her true love already….just in her dreams though. She seems so depressed that he isn’t real that the animals decide to do something to cheer her up. It just so happens that Prince Philip is still nearby, drying off after Samson accidentally dunks him into the river. The animals sneak off with his hat, cloak and boots and dress up the owl as her “dream prince” (much to Aurora’s amusement). This leads to the first rendition of “Once Upon a Dream” (taken directly from Tchaikovsky’s “Sleeping Beauty Waltz.”)

The song is simple: Aurora and Philip are in love because they’ve already met in their dreams (a funny premise for a relationship, but this is Disney after all). While Aurora and the animals are having their fun, Philip and Samson finally lay eyes on the mysterious singer and of course Philip falls in love at first sight. So what does the prince do? Join in the song of course! The prince and princess share a dance and then at the crucial moment when Philip asks her name, it’s only THEN that Aurora remembers that she’s not supposed to speak to strangers and runs off. Meanwhile, back at the cottage…things are going…well….not well actually. 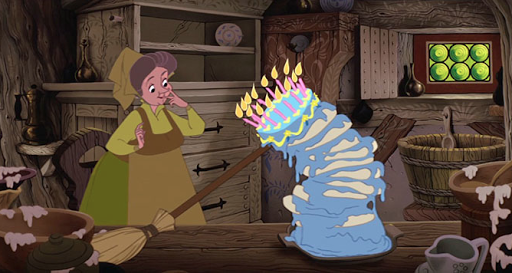 After enduring Flora’s efforts at dressmaking and watching Fauna attempt to make a cake, Merriweather finally snaps and lets the others know that if they’re going to do this properly they just need to use magic. Soon enough the cake is nearly ready, the cottage is clean and the dress is almost done. There’s just one little snag…shall the dress be pink or blue? (On a side note: the running gag of changing the dress’s color stems from a real-life argument the animators had over the very same question. They simply could not agree on whether the dress should be pink or blue so they ended up doing both…in a way.)

Flora and Merriweather get into a full-blown fight over the color of the dress, leading to magical sparks flying all over the cottage and straight up the chimney (the one part of the house they forgot to close up. Of course, the magical fight draws the attention of Maleficent’s raven Diablo, who has been searching far and wide for the missing Aurora ever since her other minions revealed that they’ve been searching for a baby for sixteen years! Diablo peeks his head in and witnesses Aurora coming home to tell her aunts about the wonderful man she’s just met, only to hear some rather earth-shattering news (one, her name is Aurora and not Briar Rose. Two, she’s a princess and she’s going back to the royal castle tonight and three, she must NEVER see that young man again (because of course the fairies have no way of knowing who he is.))

This news delights Diablo and he rushes off to inform his mistress while Aurora, quite naturally, has an emotional breakdown. This leads to one of the most ridiculous lines I have ever heard. Merriweather turns to the others and says “And we thought she’d be so happy…” I’m sorry but, how would YOU react if everything you’d ever known your whole life turned out to be a lie? I don’t think I would be happy about it personally (but that’s just me.) And remember when I said that Aurora speaks the least out of any Disney Princess? Once Aurora runs upstairs and throws herself on the bed…she doesn’t speak again for the rest of the movie.

Let me know what you think about “Once Upon A Dream” in the comments below and have a great day!