*note: there may be potential spoilers in the few score cues I mention, so keep that in mind as you read this review

As the thrilling conclusion to It (2017) approaches in a matter of days, the soundtrack for It: Chapter Two has been made available for those who wish to hear it in advance of seeing the film. Benjamin Wallfisch, who also scored the first film, returns to complete the musical story he began telling two years ago. In It: Chapter Two, evil resurfaces in Derry as director Andy Muschietti reunites the Losers Club in a return to where it all began. Twenty-seven years after the Losers Club defeated Pennywise, he has returned to terrorize the town of Derry once more. Now adults, the Losers have long since gone their separate ways. However, people are disappearing again, so Mike, the only one of the group to remain in their hometown, calls the others home. Damaged by the experiences of their past, they must each conquer their deepest fears to destroy Pennywise once and for all…putting them directly in the path of the shape-shifting clown that has become deadlier than ever

Regarding the soundtrack, Wallfisch had quite a lot to say:

Andy [Muschietti] has created such an ambitious and extraordinary movie in IT Chapter Two, with an incredible scope on every level.  One of our earliest discussions for the new score was how we could take what we did for the first movie and give it more scale and ambition – to reflect the scope of the film. To start with, we used a much larger orchestra and choir and also created several new themes; when we occasionally reprise moments from the first score, we re-recorded them with more complex and ambitious arrangements, like the music itself had gone through 27 years of maturing. But the most exciting challenge was how to develop the original themes and create new ones that fit alongside them. There was a lot more music required, which really allowed room for the original themes to develop and evolve in a way driven by the emotional complexity of how The Losers Club grapple with inner demons from the past and painful memories and ultimately unite to confront their biggest fears. Pennywise is even more vengeful and flagrant this time, and the music had to also reflect that increased darkness, whilst never losing sight of the adventure and emotion that are at the core of the movie. It was such a joy to reunite with my good friend Andy Muschietti to help bring this story home – the movie is a true masterpiece from the filmmakers and I’m so honored to have had the opportunity to be involved. 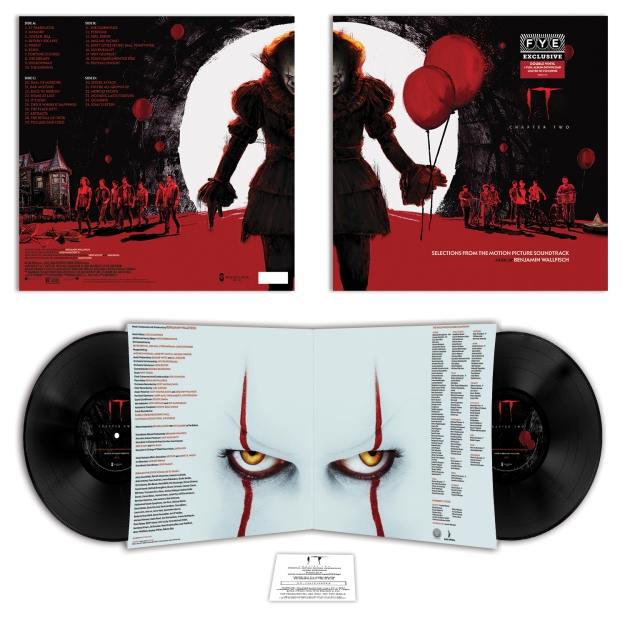 The soundtrack is, in a word, terrifying. Benjamin Wallfisch had a 100 piece orchestra and a 40 person choir to work with when putting this score together, and I assure you he used it all to great effect. If you follow me on Twitter, you’ll know that as a general rule I avoid most horror films, and the music (if done properly) is a big reason why. Wallfisch has filled the score with “jump” moments, where out of nowhere the music will surge up and almost literally snap at you. You can’t even relax during the “brighter” moments because there’s an undercurrent of tension and fear with almost every piece (“Losers Reunited” being an exception to the rule).

Musical jump scares aside, the part that freaks me out the most about this soundtrack is what Wallfisch has done with the choir (at least, I assume it’s the choir). Throughout the soundtrack, and without warning, there are sections where you hear garbled voices, kind of like if you were listening through a static-filled radio, and the voices all sound like they’re screaming in terror. Sometimes these voices act as their own music, sometimes they come in with music, but it’s without a doubt one of the most terrifying things I’ve heard in a soundtrack this year (and probably in the last few years if I’m honest).

And another thing that Wallfisch is doing in the soundtrack that really scares me is how he manipulates the violins throughout the score. This is something I’ve heard in a lot of scary movies; it’s a technique where a group of violins plays at their highest register and quickly increases in volume and pitch, ending with an almighty shriek that has you instinctively backing up against the wall, even though you know there’s nothing there (well, at least that’s what it does to me). I can only imaging the visual context for those moments, and given this is a movie with Pennywise in it, I’m afraid to find out the answer.

Benjamin Wallfisch clearly put a lot of work into this score, and if it’s this scary by itself, I shudder to think what it would be like to hear this music with the film it was written to accompany. If you liked the score for the first It, then you will love the music for It: Chapter Two.

Let me know what you think about the soundtrack for It: Chapter Two in the comments below and have a great day!