As my exploration of The Nightmare Before Christmas soundtrack continues, I next came to the song “What’s This?” which is the only other song from this film I know about, even though I hadn’t seen it in full until just a few moments ago. A little context in case you didn’t know: Jack Skellington has been rather down as of late since he’s always doing the same thing every year. The day after Halloween, he stumbled upon a group of doors that serve as portals to other realms similar to Halloween Town, but devoted to different holidays. Curious, Jack opens the door that takes him to Christmas Town, “What’s This” is his reaction to everything he finds there:

There’s frost on every window. Oh, I can’t believe my eyes
And in my bones, I feel the warmth that’s coming from inside… 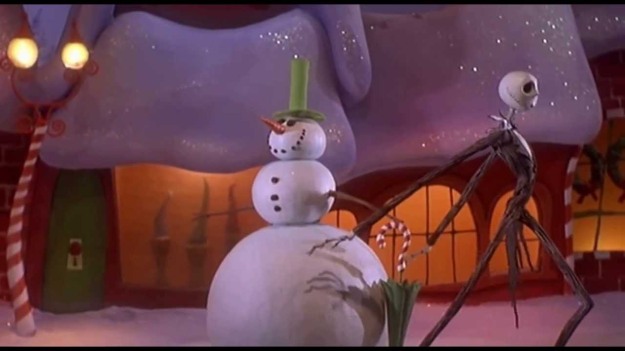 Oh, look!
What’s this?
They’re hanging mistletoe
They kiss… Why, that looks so unique.
Inspired, they’re gathering around to hear a story, roasting chestnuts on a fire. What’s this?

What’s this in here?
They’ve got a little tree
How queer! And who would ever think?
And why?
They’re covering it with tiny little things
They’ve got electric lights on strings. And there’s a smile on everyone. So, now, correct me if I’m wrong!
This looks like fun this looks like fun.
Oh, could it be I got my wish?
What’s this?

Oh my, what now?
The children are asleep
But look, there’s nothing underneath
No ghouls, no witches here to scream and scare them
Or ensnare them, only little cozy things secure inside their dreamland…
What’s this?

The monsters are all missing and the nightmares can’t be found
And in their place, there seems to be good feeling all around
Instead of screams, I swear
I can hear music in the air
The smell of cakes and pies are absolutely everywhere…

The sights, the sounds
They’re eveywhere and all around
I’ve never felt so good before
This empty place inside of me is filling up
I simply cannot get enough

I didn’t think it was possible, but I think I like “What’s This” even more than “This is Halloween.” Jack’s reaction to everything Christmas is absolutely adorable and so innocent…seriously, once he’s there, Jack has this overwhelming curiosity about everything he’s seeing. It makes sense, since Jack has been in Halloween Town since, well, forever. There’s also something completely incongruous about seeing a walking, talking skeleton in Christmas Town that I love watching also. And also, I have to say, the stop-motion animation in this sequence is simply amazing, it’s so hard for me to believe that this was made in 1993 (and yet it was!)

I’m definitely going to have to see this movie in the near future. Let me know what you think about “What’s This?” in the comments below and have a great day!

The Nightmare Before Christmas “This is Halloween” (1993)

The Nightmare Before Christmas “Jack’s Obsession” (1993)

The Nightmare Before Christmas “Kidnap the Sandy Claws” (1993)