Fifteen year old Hercules is having a really hard time fitting in, even more so than most teenagers. The gangly teen possesses the strength of an immortal god and has no idea how to control it. And while his mortal parents love him dearly, they have no idea how to help their son control his strength either. Things come to a head when Hercules attempts to insert himself into a discus game, loses control and inadvertently destroys the entire market. This incident (apparently the last of many) is the final straw for the other residents of the town, who warn Amphitryon (Hercules’ adoptive father) to “keep that FREAK away from here!”

Hercules can’t help wanting to agree with that assessment: what is he if not a freak? All he wants is to find a place where he belongs and is welcomed by all. This is the basis for “Go the Distance,” and it is a song that is very close to my heart. See, like Hercules, I had a very hard time fitting in too, and so I’d spend hours and hours daydreaming of finding a place where I really belonged. In Hercules’ mind, if he can find this place of ultimate welcome, he will have “gone the distance.” Like most songs in the Disney Renaissance, “Go the Distance” was composed by Alan Menken with lyrics provided by David Zippel. Roger Bart is the singing voice of Hercules. 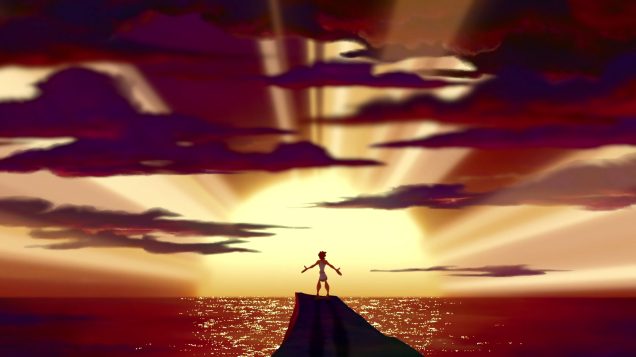 I have often dreamed
Of a far off place
Where a great, warm welcome will be waiting for me
Where the crowds will cheer
When they see my face
And a voice keeps saying
This is where I’m meant to be

But where to start? Well, upon returning home, Hercules’ finds his parents have some news for him: he’s not actually their son. They found him as a baby wearing a medallion with the symbol of the gods on it. This gives Hercules an idea: he can go to the Temple of Zeus and ask the gods for the answers! This leads to the following reprise as Hercules travels on his way: 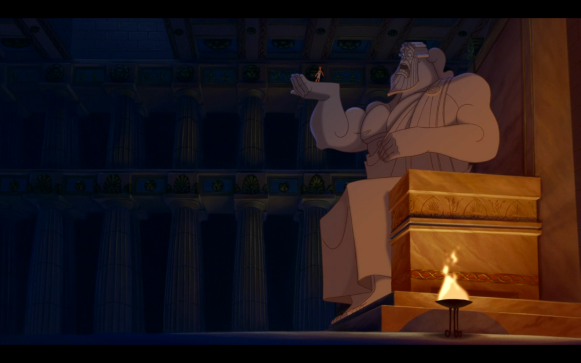 And in the immense Temple of Zeus Hercules does indeed find his answers: he’s FAR from normal, in fact, he’s actually a god (what a thing to find out when you’re 15)! The long lost son of Zeus and Hera to be exact! There IS a way that Hercules can come home to Mount Olympus however: he must become a true hero to regain his godhood. And to become a hero…he must seek out Philoctetes, a legendary trainer of heroes.

But before Hercules leaves, Zeus has a gift for his son: Pegasus, now a fully-grown winged horse! The pair bond instantly, as they did before and now Hercules has a plan: find Philoctetes, become a hero and rejoin the gods on Mount Olympus! The teenager has a final reprise as he flies off on Pegasus into parts unknown:

I will beat the odds
I can go the distance
I will face the world
Fearless, proud and strong
I will please the gods
I can go the distance
Till I find my hero’s welcome
Right where I belong!
Just as the moment ends, the camera pans up to show how close the planets are to alignment (something that will be revisited periodically until the climax of the story). Next time: Hercules and Pegasus meet Philoctetes, who is not quite what they expected.
And that’s “Go the Distance”! I really love this song and I hope you enjoyed it as well.

You can become a patron of the blog at: patreon.com/musicgamer460