After literally digging his way out of the city pound (the canine equivalent of prison), Charlie (Burt Reynolds) and his long-suffering best friend Itchy (Dom DeLuise) make their way back to the casino that Charlie used to run with Carface (Charlie’s name is conspicuously scratched out on all the signs). All of the dogs are shocked to see Charlie, since apparently he was meant to be “on death row” (scheduled to be euthanized if I had to take a guess). Charlie doesn’t have a clue that it was Carface who set him up to be taken away in the first place, he’s too busy enjoying his freedom. As Charlie explains (with Itchy’s help), nothing is ever going to keep this dog down! 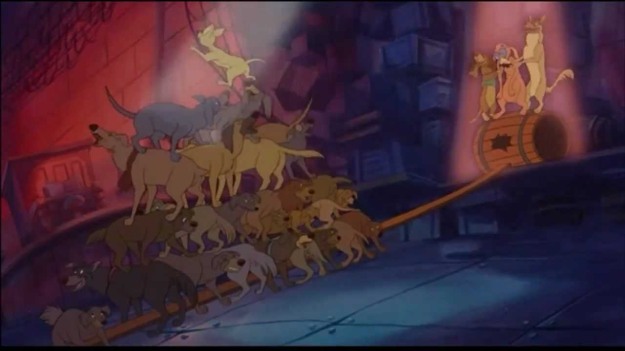 I need to talk about this verse before we move on to the rest of the song. I nearly fell over in shock when Itchy did the line “And even a bit of Siam” complete with a bowl on his head and a faux Asian face (granted it’s not as extreme as older Asian stereotypes, but still!) The reference to Siam is not a problem in and of itself as the film takes place about 4 months before Siam became Thailand (while only the year 1939 is given, Carface later mentions Mardi Gras which takes place in February). No, my problem is that in a film made in the late 1980s, they thought it was okay to include a racist, Asian stereotype. That is not okay!

This concludes my rant, now back to the song:

Burt Reynolds and Dom DeLuise were friends for many years and you can really feel a solid dynamic between them as they perform this song. The song makes it clear that Charlie is popular, charismatic and a confirmed crook (the last verse even mentions “He tried a life of virtue but prefer a life of sin” It’s not wonder Charlie is so nervous about judgement once he arrives in Heaven). I also noticed that despite being a dog, Charlie acts remarkably human during this scene (in that he stands and performs on two legs). Most of the time Charlie gets around like a regular dog, but this is a noticeable exception (sometimes I wonder if Bluth originally meant to make the dogs more anthropomorphic and then changed his mind).