To say that Mulan’s visit with the matchmaker went badly would be an understatement: it was an unmitigated disaster. And what’s more, the matchmaker pronounced these words of doom: “You may look like a bride, but you will NEVER bring your family honor!” In other words, Mulan has been deemed incapable of making a good marriage, and considering she’s the only child of her family, that’s nothing short of catastrophic. Upset because she’s let everyone down, Mulan heads home to think about where her place in life really is. This is the song “Reflection” and it touches close to my heart because I’ve been where Mulan is at times.

In “Reflection” Mulan expresses how she is suffering from an identity crisis. Her whole life she’s been prepared to be the “perfect bride”, and now that she’s failed, where does she go from here? She can’t really be herself, because that upsets her family. In her guise as a perfect young lady, Mulan doesn’t even recognize herself:

Can it be, I’m not meant to play this part?

Now I see, that if I were truly to be myself, I would break my family’s heart…

I think this song speaks to everyone, male or female, that is struggling to discover who they really are, not what society dictates they should be. I find the chorus to be very powerful. 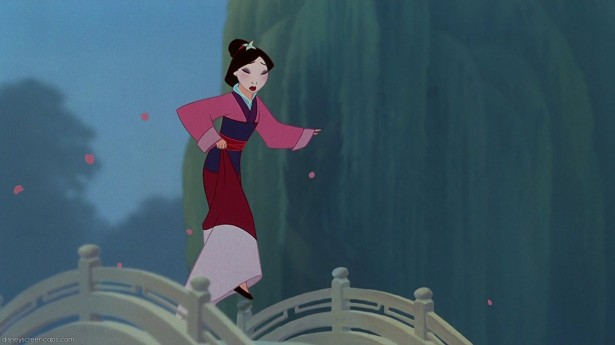 Who is that girl I see? Staring straight, back at me? Why is my reflection someone I don’t know?

Somehow I cannot hide, who I am, though I’ve tried,

When will my reflection show, who I am inside?

And this image of Mulan with half the makeup on is really striking: this is the visual evidence that she is caught between two worlds: a world where she can be herself, and the traditional world where everyone wants her to live.

I also really like the conversation Mulan has with her father under the cherry tree. He doesn’t yell or rant, he doesn’t even act angry. Instead he talks about how beautiful the cherry blossoms are this year. One blossom, however, hasn’t bloomed with the others. But when it does bloom, it will be the most beautiful blossom of all. This is a beautiful analogy: as her father sees it, Mulan is simply a late-bloomer, and someday he’s sure she’ll make him very proud (despite what the matchmaker said).

One last note: people keep trying to tell me that this is Christina Aguilera singing in this scene and it is NOT. Christina Aguilera sings the pop version of “Reflection” while Lea Salonga sings in the movie version. What do you think of “Reflection?” Leave a comment below and tell me what you think 🙂 Next time, we’ll take a break and look at an orchestral selection with “Mulan’s Decision.”

There are many romantic songs in the Disney Universe, too many to list all at once. But of all those Disney love songs, “A Whole New World” probably ranks up at the top. And why not? Being whisked away on a magic carpet ride to fly all around the world is a beautiful idea. This song was nominated for and won an Academy Award for Best Original Song. It also remains the only Disney song to win Song of the Year at the Grammy Awards.

“A Whole New World” at the 65th Academy Awards

I can show you the world
Shining, shimmering splendid
Tell me, princess, now when did
You last let your heart decide!
I can open your eyes
Take you wonder by wonder
Over sideways and under
On a magic carpet ride
A whole new world
A new fantastic point of view
No one to tell us no
Or where to go
Or say we’re only dreaming
A whole new world
A dazzling place I never knew
But when I’m way up here
It’s crystal clear
That now I’m in a whole new world with you

The song (and everything that takes place during it) is how Prince Ali/Aladdin finally thaws his way into Princess Jasmine’s heart. Being used to stuck-up suitors who just viewed her as a “prize to be won”, Prince Ali stuns her by saying that she should be free to make her own choice (regarding who she marries).

Aladdin’s idea of inviting Jasmine for a ride is brilliant, but he makes a mistake (the first of several during this sequence). When Jasmine asks if it (the carpet) is safe, Ali/Aladdin says “Sure, do you trust me?” (When Aladdin met Jasmine while she was in disguise in the marketplace, he asked her the exact same thing as they were fleeing the city guards). Jasmine is slightly suspicious, but she agrees to come anyways, leaving a bewildered Rajah far behind.

I have a small story to share about this song. Two summers ago, I went home for a visit and attended an Il Divo concert with my mom (Il Divo is a singing group consisting of operatically trained male singers, look them up, they’re amazing). And during this particular concert tour, they had a guest performer with them: Lea Salonga, aka the singing voice of Princess Jasmine!!! You can imagine my unbridled joy when, in the middle of the concert, a familiar tune started up and Lea Salonga performed “A Whole New World” for us (with various members of Il Divo filling in for Aladdin)!!!! It’s been over twenty years since Aladdin came out, and she still sounds just the way she did in the movie.

The flight starts in Agrabah but quickly moves across the desert, through Egypt (where the Sphinx loses its nose as a result of the carver being startled by the pair flying past), through what appears to be Ancient Greece, and finally China. The song is all about the experiences of life, and how Aladdin can show her the world she’s never gotten to see before. My favorite verse of all comes from Princess Jasmine:

“I’m like a shooting star/I’ve come so far/I can’t go back to where I used to be!”

In essence, this whole experience has changed Jasmine, to the point where she can no longer go back to simply living in the palace, she’s seen too much of the outside world for that.

Ali/Aladdin unwittingly continues to leave little clues as to who he really is. As the pair fly through Greece, Aladdin plucks an apple off a nearby tree and rolls it to her exactly as Aladdin did (again, in the marketplace). This time Jasmine gets a knowing look in her eyes. She’s still not sure exactly HOW it’s happened, but she knows now that Ali has to be Aladdin.

In closing, I love this song, it was very well done (there have been times where I’ve listened to this song on repeat). It’s also a nice quiet interlude because once this song is over, things in the story begin to move very quickly.

*All images are the property of Walt Disney Studios