Quasimodo has one of the most dysfunctional and abusive upbringings in the Disney canon (even worse than Rapunzel’s, because while it’s true Mother Gothel kidnapped the princess and mentally abused her so she’d stay in the tower, she didn’t kill either of Rapunzel’s parents). After causing the death of Quasimodo’s mother, Judge Frollo (Tony Jay) nearly drowns her baby before the Archdeacon of Notre Dame stops him and orders him to raise the child as his own as penance for what he has done. Frollo translates this to keeping Quasimodo (Tom Hulce) locked up in the bell tower for the next twenty years, raising him to believe he is a monster that his mother abandoned.

As a young man, Quasimodo spends most of his days observing the residents of Paris (when not ringing the church bells) as they go about their daily lives, longing to walk among them. He especially wants to participate in the annual Feast of Fools and his friends the stone gargoyles encourage him to go. When Frollo learns that the bell-ringer tried to leave (again), he reminds Quasimodo that he is a monster and if he goes outside he’ll be reviled as such. The only way he can remain safe is to stay in the tower and do exactly as Frollo says. While Quasimodo acquiesces to his master’s wishes, his desire to experience life outside the cathedral remains and this is the theme for “Out There.” 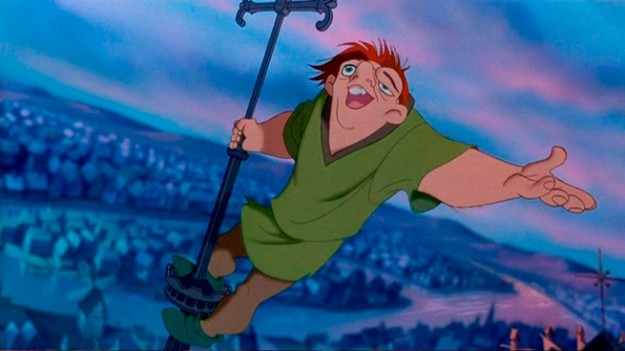 If I was in their skin
I’d treasure every instant

Out there, strolling by the Seine
Taste a morning out there, like ordinary men
Who freely walk about there
Just one day and then, I swear
I’ll be content
With my share

Won’t resent
Won’t despair
Old and bent
I won’t care
I’ll have spent one day out there!

Quasimodo expresses the wish of many Disney heroes and heroines: “I don’t like how my life currently is, but if I can just do this one thing I will be happy forever.” The song is practically a staple in Disney musicals but that isn’t a bad thing if it’s done properly and “Out There” is one of my favorite Disney songs. During the scene, Quasimodo clambers all over Notre Dame, letting you see the beautiful sculptures and architecture that make the cathedral so famous. The animators took a special trip to Paris to sketch the building and it really shows throughout the film.

Of course, if you’ve been keeping up with Disturbing Disney then you know Quasimodo’s first trip into the outside world will end badly. Despite that, it’s so easy to feel for the bell-ringer as he sings; to be that close to a bustling medieval city that you’re not allowed to visit would leave anyone feeling lonely and depressed (it’s amazing that Quasimodo grows up relatively well-adjusted).

What do you think about “Out There”? Let me know your thoughts in the comments below and have a great day!

The Hunchback of Notre Dame “God Help the Outcasts” (1996)

The Hunchback of Notre Dame “The Court of Miracles” (1996)