After the 9 members of the Fellowship of the Ring are assembled at the conclusion of the Council of Elrond, preparations are made for the group to leave Rivendell on their dangerous quest. (As a refresher, the Fellowship consists of: Frodo, Sam, Merry, Pippin, Gandalf, Gimli, Legolas, Boromir and Aragorn).

Arwen and Aragorn (who are very much in love, despite Elrond’s wishes) make a final farewell, but it is not a happy one. We will learn later that Elrond has pressured Aragorn into dismissing Arwen’s love, to encourage her to travel across the sea when her father makes his last journey (if Arwen were to stay in Middle Earth with Aragorn, they would never see each other again). Aragorn is also confronted (by Elrond) regarding his destiny: he is the last surviving member of the royal bloodline of Numenor; he and he alone could unite the realms of men and become King, but Aragorn swears he does not want this destiny, he has never wanted it. 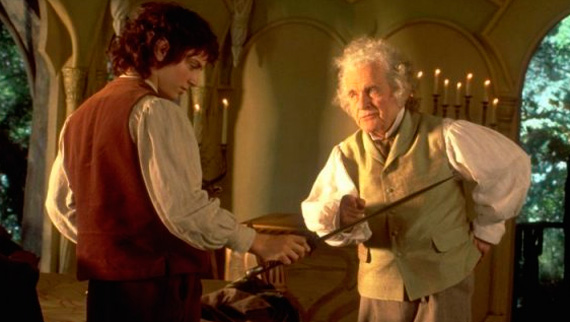 Elsewhere, Frodo and Bilbo have their last moment together and Bilbo has some gifts for Frodo: his old mithril shirt (that can repel any blow) is given to him to wear secretly under his clothes. Frodo is also given Bilbo’s elven sword Sting, which (like all Elven blades) will glow blue whenever orcs are close by (it’s curious then, that Legolas’s daggers don’t glow blue as well). As Frodo goes to put the mithril shirt on, Bilbo catches a glimpse of “his” old Ring, and he pleadingly asks to hold it one last time. When Frodo draws away however, Bilbo has a frightening “Gollum” moment that scares them both (and reveals that the Ring still has a very strong grip on the old hobbit). Guilt-ridden that his Ring has placed Frodo in this mess, Bilbo apologizes for everything that’s happened, and the two say farewell. 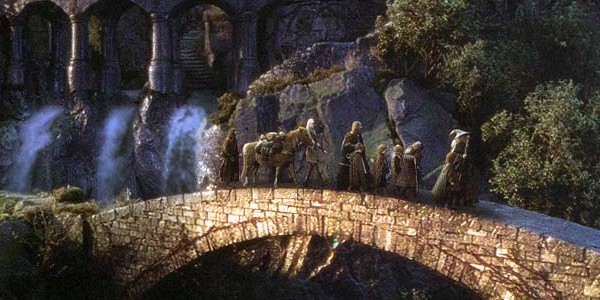 Now comes the moment the Fellowship departs, crossing the bridge that leads out of Rivendell. As they do, a theme begins to build, starting with a single French horn, and slowly building in intensity. We have actually heard snippets of this theme before, beginning when Aragorn first takes the four hobbits “into the Wild.” It is the main theme of the Fellowship and now we are to hear it in full, in all its glory, along with the famous “Fellowship passing by” scene. It’s a grand moment, but sadly very short-lived, as the music immediately begins to die away after the climax and the scene moves on.

There are some gorgeous scenic views in this short sequence, and it never fails to impress me that the entire trilogy was filmed in New Zealand; it’s the perfect setting for Middle Earth (and I fully plan on visiting the country some day if I ever get the chance).

For more Fellowship of the Ring, see also

The Fellowship of the Ring “The Treason of Isengard” (2001)

The Fellowship of the Ring “The Bridge of Khazad-Dum” (2001)

*all images are the property of New Line Cinema