The Rambo franchise is a series of films consisting of: First Blood (1982), Rambo: First Blood Part II (1985), Rambo III (1988) and Rambo (2008). Of these films, the first three were all scored by Jerry Goldsmith. For the fourth (and ultimately final) entry in the series, the score was composed by Brian Tyler (Iron Man 3, Thor: The Dark World, Avengers: Age of Ultron). It’s been a while, but I’ve seen most of the franchise, including this film, and I remember enjoying it very much (though I found some of the violence hard to take, but that’s just me.)

Rambo is set twenty years after the events of Rambo III and finds John Rambo living in Thailand barely making a living from catching snakes and providing boat rides. He ferries a group of missionaries up the Salween River into Burma and drops them off at a village of Karen tribespeople. The group is later captured when the ruthless Major Pa Tee Tint attacks and massacres the village.

Rambo later transports a group of mercenaries on a rescue mission and secretly follows along after his offers of help are refused by the group’s leader. It is up to Rambo and his allies, a Karen rebel named Myint and the mercenary sniper nicknamed “School Boy” to save the mercenaries and the hostages when the former are also captured by Tint’s men. It’s a bloody fight that ends with Tint and all of his men dead (with Rambo personally dealing with the major). After all of this, Rambo decides it’s finally time to return to the United States and visit his family, which is where we see him as the story ends. 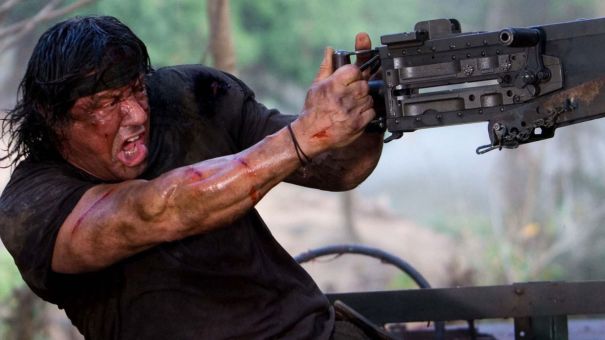 To help maintain continuity between this film and the rest of the franchise, Tyler was asked to incorporate Goldsmith’s original themes into his score. Tyler, in the interview, describes the score as an overall homage to Goldsmith’s work. At the same time, Tyler is incorporating new themes of his own, a sort of blending of the old and the new as far as the music goes.

I’ve been a fan of both Goldsmith’s and Tyler’s work for quite some time (if you’ve never heard of Brian Tyler before, I urge you to go look up his work, you can find just about anything he’s written on YouTube, he’s a phenomenal talent), and this interview provides great insight into his thought process. The interview also contains comments by Sylvester Stallone (who not only starred in this film, he also directed it and wrote the story.)

I hope you enjoy this interview and please, do check out Brian Tyler’s work, it really is amazing.