Having been unwittingly sold by Honest John and Gideon to the gypsy Stromboli, Pinocchio is all set to make his big debut in the puppet* theater as the star attraction. Nearby, Jiminy Cricket watches the proceedings with disgust, he can’t believe Pinocchio has fallen into this “I’ll be a big star” trap so easily. The show begins and Pinocchio is introduced by a chorus of puppet trumpeters.

To my knowledge, “I’ve Got No Strings” is the only Disney song to have a false entrance. For you see, as the music begins and Pinocchio (Dickie Jones) begins his first line “I’ve got no strings to hold me do-” he trips over his own feet and somersaults down the stairs to land in a heap on the stage, to the great amusement of the audience. 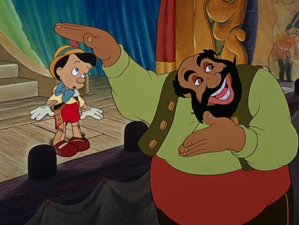 In a big dose of foreshadowing, Stromboli nearly loses his temper and only his hastily remembered knowledge that there is an audience present stops him from beating the puppet on the spot. Stromboli encourages Pinocchio to try again (I shudder to think of what might’ve happened if Pinocchio had messed up a second time) and the song properly begins: 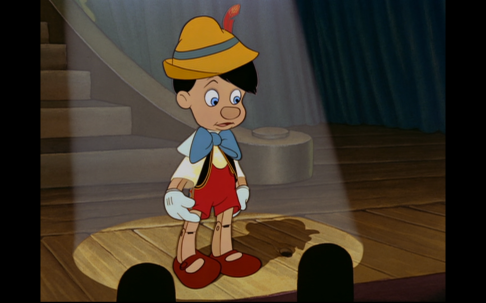 I’ve got no strings
To hold me down
To make me fret
Or make me frown
I had strings
But now I’m free
There are no strings on me
Hi-ho the me-ri-o
That’s the only way to go
I want the world to know
Nothing ever worries me
I’ve got no strings
So I have fun
I’m not tied up to anyone
They’ve got strings
But you can see
There are no strings on me
Pinocchio is a hit with the audience! To the delight of the young puppet, the audience applauds his performance and Pinocchio joins in the applause until the scene changes and a coy Dutch girl puppet descends to the stage:

You have no strings
Your arms is free
To love me by the Zuider Zee
Ya, ya, ya
If you would woo
I’d bust my strings for you
After a group of Dutch girl puppets dance around Pinocchio (knocking him around a little in the process), they retreat only to be replaced by a sultry French girl puppet: 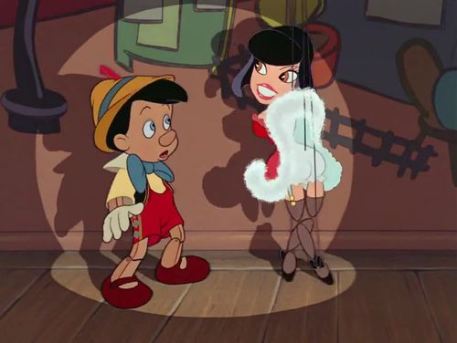 You’ve got no strings
Comme ci comme ça
Your savoire-faire is ooh la la
I’ve got strings
But entre nous
I’d cut my strings for you
After this solo, Pinocchio is joined by a group of French girl puppets dancing the can-can, a revealing dance where (in real life), the dancers raise their skirts to show off their legs and petticoats. This is the one dance that attracts the attention of Jiminy Cricket who whips out a pair of spectacles to get a better look at the dancing girls. Of all the puppets, I liked the French puppet the best (just my preference). At the end of the dance, the scene changes once more and Pinocchio is joined by a Russian girl puppet: 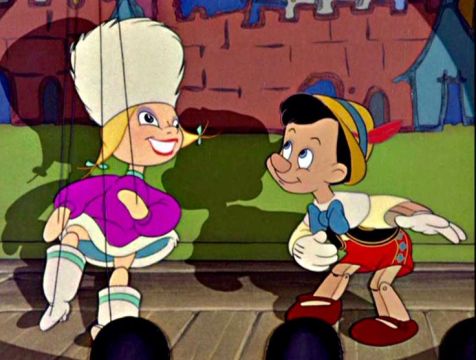 Down where the Volga flows
There’s a Russian rendez-vous
Where me and Ivan go
But I’d rather go with you, hey!
Unlike the other verses, this time the Russian girl is replaced by a troupe of male Russian dancers doing the traditional Hopak dance (often mis-labeled as “The Cossack Dance”), which is actually Ukrainian in origin. Pinocchio is so taken with this dance that he does his best to imitate the puppets with varying degrees of success. When the puppets move to wildly spinning, Pinocchio attempts to copy them, but as you might expect, the young puppet ends up tangling himself in all the puppets and proclaims to the audience:

There are no strings on me!
To his relief, the audience’s laughter is complimented by wild cheers and applause and money begins raining down onto the stage (to the great delight of Stromboli). Jiminy is saddened by Pinocchio’s success, as it seems now like the young puppet will never want to go home and learn how to be a real boy.
Of all the songs in Pinocchio, “I’ve Got No Strings” is widely considered to be one of the most popular and enduring songs along with “When You Wish Upon a Star.” The music was composed by Leigh Harline, with lyrics provided by Ned Washington. The song was (in)famously used in the marketing for Avengers: Age of Ultron when a twisted rendition of the first verse played in the background of several trailers (ending with Ultron finishing the line “there are no strings on me.”) In the film, this song serves the purpose of giving the audience a lighthearted moment before the story takes another turn for the dark; in this case, when Stromboli locks Pinocchio into a birdcage and promises to chop him up for firewood if he doesn’t behave and keep making money for the gypsy.
*I know technically the “puppets” are all marionettes because they’re manipulated by strings, but I referred to them as puppets because that’s easier to type out than saying marionettes over and over again.
What do you think of “I’ve Got No Strings”? Besides Pinocchio, is there a puppet in this song that you like the best? Let me know your thoughts in the comments below 🙂 Thank you so much for supporting the blog, it means the world to me.
Don’t forget to like Film Music Central on Facebook 🙂
Become a Patron of the blog at patreon.com/musicgamer460
Check out the YouTube channel (and consider hitting the subscribe button)
See also:
Pinocchio “When You Wish Upon a Star” (1940)
Pinocchio “Little Wooden Head” (1940)
Pinocchio “Hi Diddle Dee Dee (An Actor’s Life for Me!)” (1940)
Pinocchio “Hi Diddle Dee Dee (reprise)” (1940)
and for the more disturbing aspects:
Disturbing Disney #1: The Coachman in Pinocchio (1940)
Disturbing Disney #2: The truth of Pleasure Island in Pinocchio (1940)
Disturbing Disney #3: Escaping Monstro from Pinocchio (1940)
For more Disney songs, check out the main page 🙂